Things Are Looking Up... 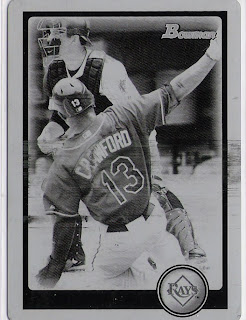 Greetings Trollites! Thanks to all for being SO patient with me! Things are slowly looking up. Slowly. My battle with my 1990 Jeep Cherokee is coming to a close. Two weeks ago I blew the head gasket on it. I have pumped (literally) thousands of dollars into this car over the past 2 years. I spend most of my free time working on it just to keep it running. I bought this car brand new 22 years ago, paid cash and have really treasured it. When the head gasket went, I knew I could fix it, BUT was struggling with how well I wanted to fix it. I was planning on taking it apart, milling the head and block, doing a valve job, porting the head, replacing the pistons, cam, lifters and valve springs... After some thought I decided that all that work and money won't guarantee that the car will run like new for long. I decided that I am going to replace the head gasket, clean it up and put a for sale sign on it. It was a hard choice - this Jeep has been the longest constant in my life (other than my parents) so life without it will be WEIRD. 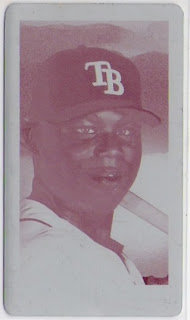 I will be replacing the head gasket on Sunday and should have it up on Craigs List by Sunday night. With all the repairs I have no savings left. The plan is to sell this Jeep, continue to take the bus and bum rides to work and hopefully have some down payment money soon. That will be weird too as I have NEVER had a car payment in my life. I do plan on staying with the Jeep family. I really want a Wrangler, but we will see... 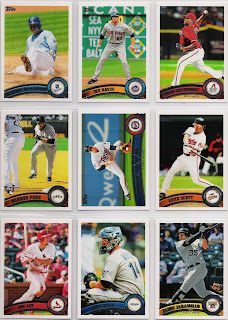 On a card collecting note: The Pujols card sold for $77.00. I was hoping for a little more, but it was a butt ugly card and it was pretty great to be able to cash it in. I have thrown up some more stuff on the 'Bay. I put up some of my Carl Crawford cards. With him on the Red Sox I have lost interest in collecting him completely. My interest may return, but it will take a while. It took me 18 years to return to collecting Danny Tartabull after he signed with the Yankees, so we will see. If you have any interest in CC cards, there are 5 up there right now including the gem of my collection, my favorite card of CC, this 2007 Upped Deck Black autograph. 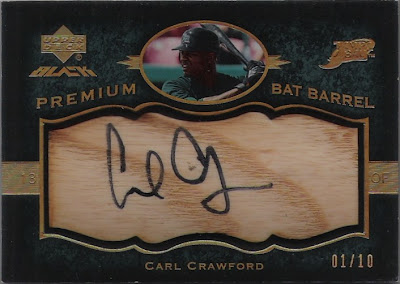 Here is the link if you are so inclined... There are a couple of printing plates and another autograph. I thought I would sell off the high end stuff for now. I really don't want to sell any cards I got in trades, so I am just going to sell the stuff that I bought on the bay last year. Anyway, I will try and not be so quiet. I have some neat stuff to post and have gotten a lot of trade stuff and probably have a bunch more waiting in my post office box. I don't like not blogging, but I have to say that it was pretty neat that I missed the ENTIRE Manny Ramirez era with the Rays...Oh, this is the link to the 6 cards that I have listed right now... Oh, the pic at the top of the post is my first completed page from 2011 Topps. I am getting closer and closer!!! The other pic is another CC printing plate that is up for sale...I hope that if I have a working vehicle and I don't spend my days stressing about how I am gonna get to work, then I might have more time to post, so I am crossing my fingers on that... I am STILL collecting, but I am just sticking to set building and vintage. Not so worried about my PCs right now. Thanks for reading. troll out.
Posted by Collective Troll at 11:45 AM