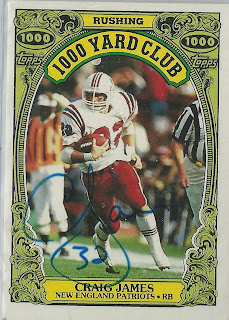 Good evening Trollites!!! How is everyone doing? Worn out from a weekend of playoff football? Regular readers know that I am not a football guy. I don’t collect football cards and I don’t follow the sport too much. I don’t dislike it, it’s just nott baseball… I actually do have a favorite team and try to watch them every Sunday. This year my Mother-In-Law bought herself an early Christmas treat – a 46” HD TV. I have been on her couch most Sundays since. She is a die-hard fan of the same team as me. Her boyfriend is a Dolphins fan. Her family (who all live in Michigan) are big Lions fans. Her and I cheer for a team that managed to lose it’ s last 10 games perfectly, without a win mixed in. Yeah, I love the Bucs, as embarrassing as that is right now, I do love my Buccaneers…

I have been really lucky to watch them get their butts kicked in High Definition… It makes the bad plays look worse, for sure. Their final game was straight up pathetic – like they had stopped trying all together… I don’t think their head couch was the cause of their horrible play, but he took the blame and got the ax. I liked Coach Morris… I have pewter-colored glasses but I do have a grasp on reality. I know they aren’t a playoff contender, but I also know they aren’t as bad as they played the last 3 months. I hope/they will bounce back in 2012…

Anyway, with them out of the picture I had to adopt some teams to root for through the playoffs… I picked two teams for two different reasons and nearly as soon as I dedicated myself a fan, I promptly watched each of them exit the playoff picture quickly… I was very disappointed in both the Lions and Falcons… I thought each of them would put up a better fight. Since they were done so quick – I let myself ride on the coattails of one more team.

More than anything I just wanted to see somebody knock Tim Tebow out, so a Steelers fan I became. The game had its moments, but Pittsburgh’s 4th quarter comeback was the most exciting 15 minutes of sports I had witnessed since the World Series. I got WAY into it. When they tied it up and forced overtime I could hardly contain myself and my excitement. It was unbelievable and soooo awesome. Of course before I finished texting the message “the Steelers just forced sudden death overtime, your done teb…” Yeah, didn’t even finish the message before Tebow connected and sealed the Steelers coffin.

So, yeah Denver won and they advance, as did the Giants against Atlanta… Football isn’t so bad after all… I don’t know what team I will adopt yet. If someone can beat the Broncos or the Pats – that is the team I will be cheering…

Anyhoo, I have been trying to prep for my ongoing Trade Me Anything endeavor. I am working on getting the guidelines together which will be the first post; I am also working on getting singles and lots together. I hope that some of you will participate in this. I will probably try and post singles first, so they are easier to ship. I do have some big lots o’ cards. I would love to find someone who wants a big starter lot for 2011 Topps Updates. Get in touch if you are that guy (or gal). I also have some 2007 and 2008 Topps Heritage that I would love to find a proper home for. I (seriously) have over 1,000 cards for each year. No short prints, but pretty much a full base set of each year, plus a ton of dupes. If you wanna chase either of these – I would be glad to transfer ownership to anyone who would be willing to pay to ship them. Speaking of lots – I am retroactively chasing 2008 and 2009 Topps and 2006 and 2007 Allen and Ginter… I have (literally) a few cards from each set and I will be making up want lists for each set before I begin the “2012 Troll’s Trade Me Anything”.

Oh, one last thing, before I sign off, in honor the football playoffs I am going to giveaway the ONLY football card I have sitting in my collection. Some of you may remember a little while back when I posted a pic of me as a little kid walking alongside Doug Flutie… The Pats trained at Bryant College in Smithfield, Rhode Island. That is where my big sister went to school and while she was attending I would spend the weekend in her dorm room and spend the days watching the Pats train while gathering a ton of autographs. I had a pennant signed by the ENTIRE team. I got a helmet and had that signed by nearly the entire team. I only had cards of 4 different players, but I got all of them signed. They didn’t have a ton of stars, but they did find themselves in the Super Bowl that year. They didn’t put up too much of a fight, but they were there. I think I do still have autos from Tony Franklin and Andre Tippett somewhere (probably at my parents house) but this is the only one in my house.

This card isn’t in mint condition. The corners are soft and there is some light creasing, but it is still an on-card auto of a Pro-Bowl running back who made it to the Super Bowl. I can’t believe I am even acknowledging this, but Wikipedia cites him as being the last “white player” to rush for over 1,000 yards in a season… If you thought that this "white dude" had topped 1,000 yards, his high was 949 yards rushing in 1999. He did have 1188 total yards, but didn't hit 1,000 rushing... Anyhow, if you want this card – make a comment on this post. Tell me who you are rooting for to go all the way, OR tell me who you want to see get beat badly this year…

So yeah, if you want this Craig James autographed card, just comment HERE. If for some reason more than one person wants it, I will put the names in a hat and pick a winner. You have till I get home from work to comment. That means around 6:00 PM Eastern on Monday night. If you wanna drop a comment and tell me if you think that the Bucs are just a good head couch away from the Super Bowl, go ahead and say that, too...

As always, thanks for reading! If you have any suggestions for me on TMA, drop me a line HERE. If you want my Heritage dupes – drop me a line… If you have a 2011 Sean Rodriguez RAINBOW – my mailing address is on the sidebar. You may send it to me. No real need to drop me a line, but ya could…

Oh, if you "win" the card, I need yer address. Send it to me in an e-mail right HERE, It will ship out in a top loader in a PWE with a single FOREVER stamp on it...

Una cosa mas... I wouldn't mind having a few current Bucs cards in my collection. Not too many, nothing fancy, but a page worth in the Rays binder would be pretty neat. I feel the same way about the Lightning and the OKC THUNDER!