Welcome Back Carlos Pena, Welcome to First Place Rays!!! What a Way to Start the Season, a Recap in 1,000 Words... 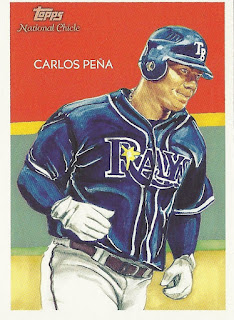 It seriously felt like October at Tropicana Field and not just because the AC is set at the same temperature… I am one of a small minority who loves the Rays home field, but having been to a dozen or so Opening Days there, I don’t think it has felt this intense and exciting on the first day of the season.
I got to see so many familiar faces in the stands – and I am proud to report that I saw VERY FEW stoopid Yankees fans out tonight. Back on (their home) Opening Day in 2007 the New Yawkers invaded and outnumbered us in a 70 – 30 split. Now I am proud to say our crowd is made up of at least 95% dedicated Rays fans.
I got to the game late, because of work, and I had missed much of the Rays fireworks, highlighted by Carlos Pena’s first inning GRAND SLAM.
I arrived just in time for Evan Longoria’s third inning solo homerun, but for the most part the bats from both teams had cooled off and the score had settled down to 6-5 in favor of the Yankees once I got there.

That stated, we will fast forward past the boring parts and get to the good stuff. 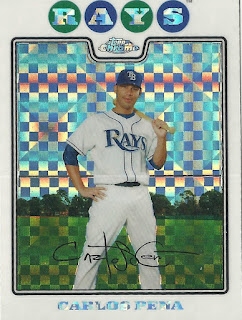 Here is the scene, it’s the bottom of the ninth inning, the Rays are down 6 – 5 and the Yankees bring in the greatest closer of all time, Mariano Rivera in search of his career 604th save…There are 35,000 fans in blue on their feet and holding their breath hoping the miracle Rays can make magic again. Tall order though, Rivera is 60 out of 61 in his career against the Rays… It should have been a foregone conclusion that Rivera would shut them down like he had done so many times before… 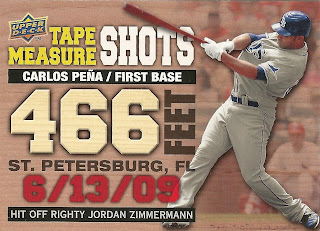 Desmond Jennings led off the inning against #42 with a base hit – he was 2-4 with a walk and 2 runs scored as the Rays’ leadoff man… Ben Zobrist followed him. Zorilla had a horrible day at the plate with an O-for with 3 strikeouts at that point. He drilled a triple into left field which plated Jennings to tie the game. This was the Rays first scoring since Longoria’s homerun in the third inning. Longo was up next and Rivera walked the slugger intentionally. Not a bad idea as Longoria was 3-3 with a solo homerun and 2 runs scored in the game. 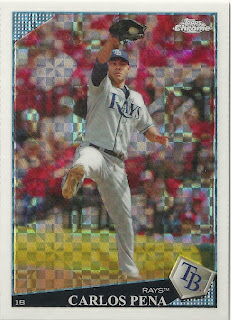 I am going to go ahead and say on record that Longoria WILL be the 2012 AL MVP. Back to the game… Luke Scott followed and was also intentionally walked to load the bases with no outs.
Sean Rodriguez was up next…
My FAVORITE Ray had been perfect on the day with a hit, 2 walks and a sacrifice till that point. The Yankees gift wrapped the ideal hero opportunity for the young infielder with the bases packed; score tied in the bottom of the ninth. Rivera’s cutter was too much and S-Rod went down swinging against the closer.
This brought up the Rays first baseman Carlos Pena. In his first game since re-signing with the Rays this offseason Pena was 1-3 with a first inning grand slam, the 8th of his career. That was the Rays LONE hit with runners in scoring position tonight. 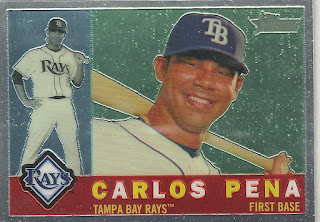 Pena put the Rays on the board in the first with the bases juiced and guess what; he did the same thing in the 9th! Well, not the exact same thing… The first innings blast went into the right field seats like so many of his homers have. In the 9th he went the other way and hit one off the wall in left centerfield. It could have easily been a base clearing triple for the left handed slugger, but the Rays needed just one run to win it, so as soon as Zobrist crossed the plate, the celebration began as the Rays came from behind to beat the mighty Yankees on Opening Day behind the heroics of Carlos Pena. 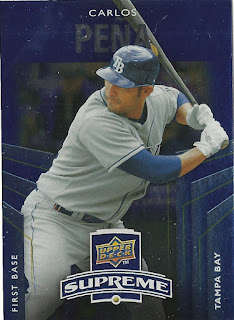 Pena was an offensive leader for the Rays from 2007 till 2010. He spent last season in Chicago with the Cubs before returning to Tampa Bay where he became an offensive star. A former first round pick, Pena had 27 homers for the Tigers in 2004, but in 2006 he spent most of the year in the minors and had just one homerun all season. The following year, his first in Tampa Bay, Pena blasted 46 homeruns and won the AL Comeback Player of the Year.
Over the last 5 seasons he has slugged 172 homers, an average of 34 per year. Along the way he has won a Silver Slugger, a Gold Glove, an All Star selection, a World Series appearance and a homerun title. 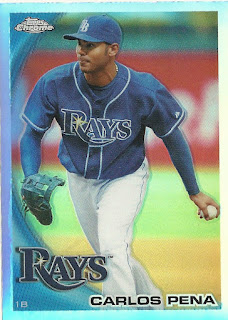 Now he is back in Tampa Bay in search of the final piece – that World Series ring!
The Rays are on top of the AL East and there is no reason to look back… Welcome back ‘Los!!!
If you are wondering, the Trop was ELECTRIC in the 9th; it truly felt like playoff baseball in April!
If you are also wondering about the pitching – what the Rays are known for, well… Shields pitched like he looks on this card. Sloppy and uncomfortable. 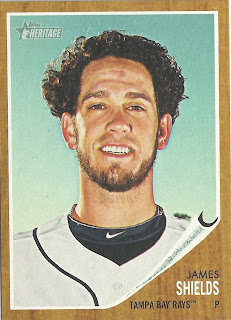 He did not his big game stuff and was lucky to get through 5 innings. He allowed 6 earned runs on 9 hits, 3 walks and 3 strikeouts. He was sloppy and the Yanks were hitting the ball hard. Shields did work out of jams. It seemed like the Yankees ended every inning with the bases loaded… I think the final number was 12 runners left on base for New York. I didn’t think that Shields was going to get out of the second inning, but he stuck it out. It was nice to see that Shields could battle for 5 innings when he clearly had nothing…
The pen was very nice though… Six pitchers combined to throw 4 innings of no hit, no run baseball.
My favorite pitcher, Wade Davis made his FIRST EVER professional relief appearance. He worked one inning, following JP Howell.
Another fav of mine, Jake McGee pitched a perfect full inning as well.
It wasn’t pretty, but it was VERY EXCITING!!!!
I need to be at work at 4 AM and I am still shaking with excitement… Its gonna be a LOOONNNGGG day.
Thanks for reading! Go Rays! Troll out.
Posted by Collective Troll at 11:26 PM