24 Pro Ball Players Share This Name or Who Grades This Stuff??? 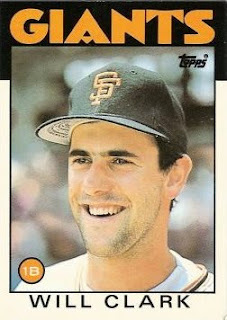 So I wanted to take a brief break from Wicked Week for this VERY random post with 2 completely different titles and topics... I don’t know what got me thinking about this, but… There have been 24 different players to play professional baseball since 1888 who shared the name Will Clark, or Will Clarke. 24 different dudes with the same name! Of those 24, eight Will Clarks made it to the Majors. A few of them had pretty decent careers. William “Watty” Clark was a pitcher who won 20 games for Brooklyn in 1932. William “Boileryard” Clark was one of the National League’s top catchers at the turn of the century. William “Win” Clark played in 4 games in 1897 while William “Dad” Clarke was 17-24 with an amazing 33 complete games for the Giants in 1896. There was also William “Stu” Clarke, Wee Willy Clark and William “Otey” Clark. All of these Will Clark’s made it to the big leagues, but it wasn’t until 1988 that a Will Clark was an All Star and the following year the same Will Clark became the first player with that name to play in a World Series. Of the 24 Will Clarks to play pro ball, the only All Star, Gold Glove, Silver Slugger and NLCS MVP among them is William Nuschler Clark, AKA Will the Thrill. That Will Clark spent 15 seasons playing at the big league level. 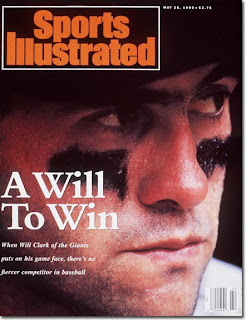 He hit nearly 300 homers, drove in more than 1200 runs and is a career .303 hitter. He played at the height of the steroid era, but his name never came up in allegations. He played hard, got dirty, wore black under his eyes and could flat out hit. Ten years after his retirement he is still one of the most collected players in the blog-o-sphere. Maybe that is why I was thinking about him and how someone with such a common name became such a huge star. 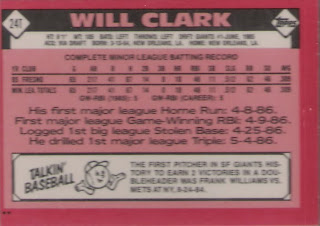 Maybe it is because during my group break I pulled about 15 different cards of him. Maybe it is because I know that so many people collect him he is one of the few players (Carl Crawford, Larry Doby and Danny Tartabull being the others) that I will buy any card that comes for sale through the card shop. Honestly not that many do. I think The Thrill still has a ton of fans even in sunny Florida. One card did make its way to the card shop this past week though, ironically it came in with a Dewon Brazelton card-Dewon is another guy that I will buy anything that comes up for sale. I basically get on the hook for any Rays that come through the door, but Dewon and Jared Sandberg and Jonny Gomes are my favorite Ex-Rays to buy, but anyway… When my buddy Frank called to let me know I had some cards waiting I was excited, but nervous because I was low on cash. He assured me it would be under 20 bucks, so I told him I would be right over. I have to say I was a little surprised when I saw the cards of Clark and Brazelton both. Surprised and disappointed actually. 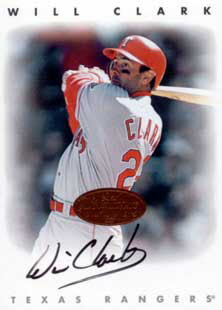 Bummed because I had both cards already, but more bummed because they were both graded. I really don’t like graded cards. I have bought a few graded 1965s and it just amounts to extra work pulling them out of their cases. Upon closer inspection I nearly hit the ground laughing and I thanked Frank very much for grabbing these for me. He picked up a few other slabbed and graded cards for me too. 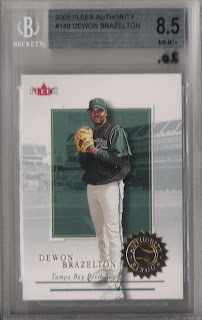 One for the PC (and I love Dewon but would never have one of his cards graded, especially one that isn't mint!), one just for this story and one just for laughs. No offense to Jim Slaton, who had a very nice career, but who grades this stuff? Moreso, who gets a card like this graded? I should mention that the seller originally want $10 each for the graded cards. He didn't get it. 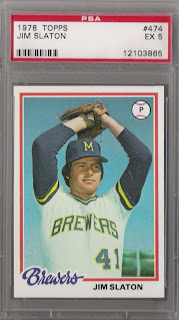 I know this started off as a Will Clark story, but it was all just a set-up for a card from 1986 that was sold in a box, opened, sent off to Beckett to be graded and came back a 4.5. It is a very sharp card corners wise, but only gets a 3 on centering resulting in the laughable 4.5 grading. 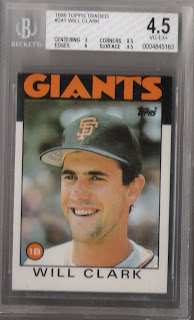 I see folks list 10s on eBay and mention that they are 1 of only 4 cards to get that grading, I wonder how many 1986 Topps Traded Will Clark cards there are out there with a 4.5 grade? I bet there are more players named Will Clark who played big league ball than there are 4.5 versions of this very card. Seriously, I think this could be one of one. It’s a keeper either way! Go Rays! Troll out.
Posted by Collective Troll at 10:52 AM