The Nuclear Bombshells Win in the Most Exciting Derby Bout EVER!!!! 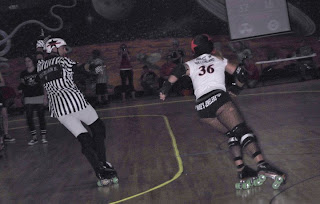 Last night in Bradentucky the Nuclear Bombshells entertained the Ocala Cannibals... A few months back the Bombshells beat Ocala on the road in a very hard fought bout. The Cannibals had payback and redemption on their mind, but the Bombshells were set to defend their ranking in front of the home crowd... It was the first bout for newcomers Red Crush and Savanah's Resurrection and they were joined by all the Bombshells regulars... The line-up of Skitzo Skater, Shitz N Gigglez, Guiness the Menace, Cajun Sinsation, Maura Cowbell, Motion 2 Strike Her, Phylla Bust Her, Rebel Hell Yeah, Malice in Rollerland, Crash Test Barbie, Sin Da Roller and Poison Apple... The 14 skater cast came together perfectly under the coaching of Blaque Jac and the Mighty Thor. 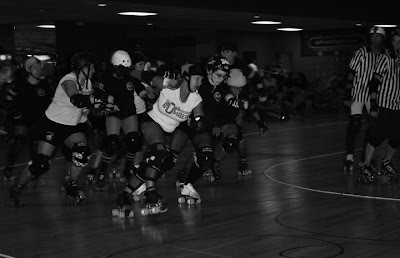 The Bombshells took the lead early and defended it through half-time, leading by as many as 28 at one point. Crash Test Barbie and Malice in Rollerland handled the majority of the jamming duties while Poison Apple and Shitz N Gigglez set the tone defensively with some explosive, amazing, out of nowhere and legit hard hits. Through the second half it was a see-saw of lead changes with Ocala leading by as many as ten points at one point. The Bombshells were relentless and set the pace and showed off their speed and endurance. 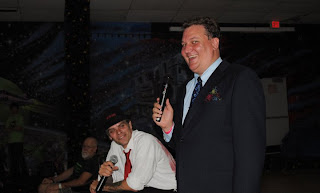 When the 2-minute mark was hit the Bombshells had a 1 point lead and it seemed like there would be just 1 more jam to decide it all. Some fast thinking by the coaching staff, a "no-huddle" offense and a few well placed time-outs spread things out more than normal. Three jams elapsed in just over 1 minute of clock time and with 3 seconds left on the period clock the Cannibals had a 1 point lead. It seemed like it was all over but Bradentucky had one timeout left and were able to get one last jam off. Crash Test Barbie put the team's fate on her shoulders behind 4 of the best blockers on the team. Barbie battled to become lead jammer, scored 4 points and called off the jam and ended the game with a BOMBSHELLS VICTORY!!!!!!!!!! 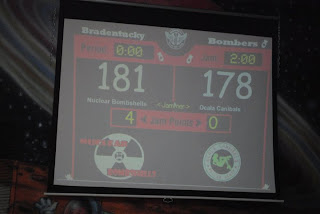 It was a down-to-wire complete nail biter and the Bombshells came together completely as a team and earned the W. Both squads played near perfect games, executed and did everything their coaches asked. The penalty boxes were empty nearly all night long and all 28 skaters had the bout of their careers. At the end the Bombshells were victorious, they improved their record to 3-1 and remained perfect at home. 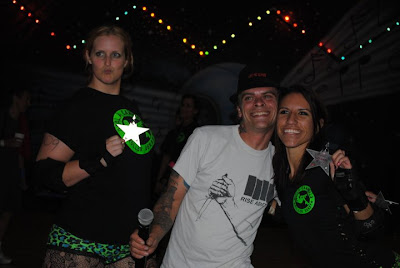 The Cannibals fought hard, but someone had to lose. The post game awards went to Sweden Sour of the Cannibals as best blocker for Ocala, while Yoshibettamove took the award as Ocala's top jammer. On the Bradentucky Side Shitz N Gigglez took the best blocker award. She missed the last few minutes of the game, on the sidelines with a knee injury. 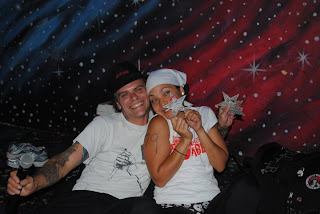 It was a scary time as Gigglez broke her ankle in a bout 2 years ago. Fortunately her surgically repaired robo-ankle was uneffected. Still she had to leave the rink on crutches... For the Bombshells, who went with a 2 jammer attack which meant zero rest for their hard working jammers. It was Malice in Rollerland who took the trophy as top-jammer for the night and the final trophy, for Coaches Choice MVP went to the super fast Crash Test Barbie who was on the floor to score the decisive final two points. It was an amazing bout, down to the wire and totally intense... Every single point mattered and each one was hard fought. The final score was 181-178. My voice is almost completely gone and I can only imagine how sore everyone is right no... All I can say is WOW and HOLY FREAKIN' DERBY!!!! I owe a big thank you to Glyph Huckster for traveling all the way from Gainesville, Florida to call this bout with me and of course a HUGE thank you to all of the refs, volunteers, coaches and of course the NUCLEAR BOMBSHELLS!!!! 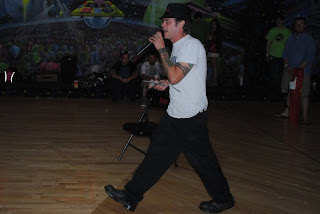 I love this game!!! All photos courtesy of the awesome and wonderful Blonde Fabulous of the Bombers. For more great bout shots, find the Bradentucky Bombers on Facebook... Go Bombers! Side of Bacon, err troll out.
Posted by Collective Troll at 2:54 PM