It Was the Best of Times, the Worst of Times... Gene Freese and I Have So Much In Common... 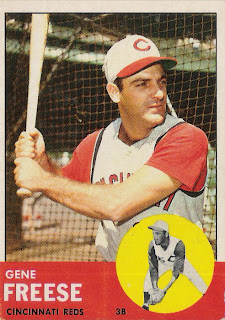 I have been dying to break the ice and get back to blogging… As always I feel like I could write a book about where I have been, where I am going and where I want to be… Lucky for you the reader, I will spare the longwinded song and dance and sum things up with a Collective Troll Card of the Day… This comes from my new favorite set, 1963 Topps Baseball, card #133 of Cincinnati Reds third baseman Gene Freese…

Just looking at the color scheme of this card is going to make most of you crave McDonalds, but I am looking deeper. Gene Freese sums up the day late and a dollar short story of my life… In 1961 Freese had the best season of his career; he hit .277 with 26 homers and 87 RBI.

He was 27, in the prime of his career and he joined the Reds, his 5th major league team. Along with Frank Robinson and Vada Pinson he helped lead the Reds to their first National League pennant in 21 years. Freese and the Reds were overmatched by the Yankees and fell to New York in the ’61 series.

There is no doubt he spent the off season working hard to put his team back into the position to battle the Yankees again for the World Championship. 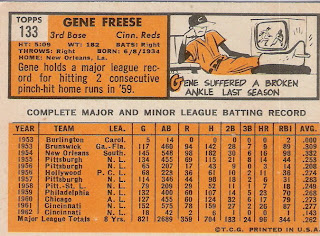 Of course this didn’t happen. Gene Freese has my luck. He broke his ankle in spring training and missed nearly the entire season. The Reds would not see the postseason again in that decade and Freese would never have a full time job again. He never hit double digit homers again and never saw the postseason again. He did jump around to 3 more teams before playing his final big league season with Houston in 1966. He managed just 3 hits for the Astros before ending his hard luck twelve year big league career.

He never made an All Star squad or won a Gold Glove, but many who saw him play in the late 50s and early 60s say he deserved to be… For today he is someone with a broken limb just like me. Go Rays! Troll out.

Posted by Collective Troll at 1:09 AM