The CT Card of the Day; This Could Be a Baseball Player, Could Be Your Uncle or Neighbor, There is No Way to Tell... 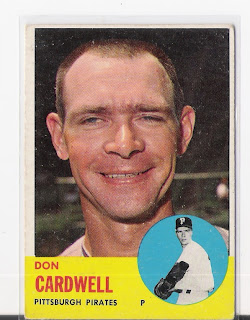 I have been singing the praises of my new favorite set, 1963 Topps Baseball, an awful lot lately, I decided to collect this set last month with only a handful of cards in my collection. I now own over 60 cards from this set get more into it with each and every card I get my hands on.
That said this set isn’t perfect… Topps made the same mistake within this set that they had been making since the early 1950s, the same mistake they continue to make now in 2011. They had their photographers snapping pictures of players without hats AND they published these awful photos and immortalized them on cardboard and included them in their annual baseball card set.

Like I said, they did it in the 50s; they did it in the 60s and 70s, 80s, 90s and have continued to do it over the last 2 decades.
Ballplayers tend to be focused on the game they are playing, more focused on that than how they looked and most of them weren’t all that good looking… It becomes convenient that their occupation requires them to wear a hat, allowing them to hide their balding heads, goofy ears and sometimes goofier faces… The ball cap is integral to a player’s “game face”. It is integral to their job and a requirement to do it.

All these things mentioned are great reasons why Topps should photograph the baseball players that they feature in their sets wearing their uniforms, their complete uniforms…
This is a really long set-up for today’s Collective Troll Card of the Day, from 1963 Topps, card #575 of Pirates pitcher Don Cardwell.

Cardwell had a pretty great career. He spent 14 years in the big leagues where he won 101 games. He topped 200 innings in a season 4 times. He hurled 17 shutouts and completed 72 of his 301 starts. He tossed a no-hitter in 1960 as a Chicago Cub, in his first start with his new squad. He was a part of the starting rotation on the Amazin’ Mets of 1969 and won a ring with that team. He had a pretty impressive resume. 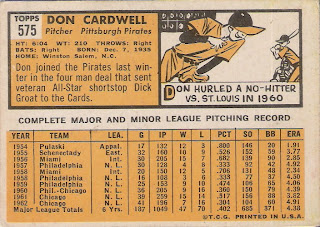 Unfortunately all I see is a goofy looking guy on this card… A picture taken WAY too close with a player missing a very important part of his uniform… A picture that one has to assume is of Don Cardwell, a baseball player, but there are zero visible clues to this...
I love this game! I love this hobby! Go Rays! Troll out.
Posted by Collective Troll at 9:25 AM