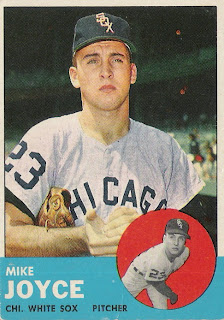 Going back in time to remember the good ole days before I became a blogger, when I was just a guy who ran out of money while still needing 30 more short prints to finish 2007 Topps Heritage. This was actually before I knew that there was such a thing as short prints. I just thought the collation was that bad. I didn’t understand why I had 24 copies of one card, but still needed others. Well, I turned to Google for answers and Google pointed me to a blog called the Cardboard Junkie. My life was changed forever. I won’t get into all of the angels singing and clouds separating on that magical day, but I discovered card blogs and I realized that these folks also tried to collect sets and were willing to trade. I sent an email to this Cardboard Junkie fellow and waited for his reply. Within my boxes of duplicates I had many cards he needed for his set AND he had a few that I needed, too. A week passed with no reply, so I wrote him again. This time his reply was immediate and so began a wonderful e-friendship.

As this friendship has progressed, Mr. Junkie has sent me some pretty awesome and amazing and surprise packages of goodies. A couple of weeks ago I got one of these surprise packages. Along with a card of my favorite Rays employee, Raymond, and some original artwork which was immediately thumb tacked to the wall, there was a stack of vintage cards. Beautiful aged slabs of cardboard with just enough wear around the edges to let you know that these had been handled, read, studied, flipped, traded, enjoyed, celebrated and cherished. These cards were beautiful AND they all just happened to be cards that I needed in my quest of completion regarding 1963 Topps Baseball cards.

Yeah, the super great thing about Senor Card Junk is he is not only one of the biggest names in card blogging and one of the most creative minds on the web, but is also one of the funniest people you will ever encounter. As a blogger he is a legend; as a collector, well, it is pretty darn easy to be jealous of him. Once again, as a blogger he is one of the best… I remember how excited I got the first time a comment appeared on my blog that was attributed to dayf13, the handle of Mr. Junkie. Yeah, as exciting as it is to know he is reading your dribble, it is even more awesome to get a package in the mail from the Junk Lair in Gawja… All this stated about his legendary status, the dude is really freaking thoughtful too! I had JUST decided to collect 1963 Topps and I had just made a list of my needs and BLAMMO there is a package from the Junkie with guess what? Yeah, a bunch of ’63 Topps in it…

From that package comes today’s CT Card O’ Da Day… From 1963 Topps Baseball, card #66 of White Sox pitcher Mike Joyce… I would be a horrible liar if I told you that I had any idea who this guy was. I didn’t. I wondered if he might be of some relation to the Matt Joyce, the Rays outfielder… I am still wondering, but I don’t think so. Basically if you want to know everything about Mike Joyce’s major league career, you could learn it from reading the back of this card. Joyce was a Michigan Wolverine and signed with Chicago as a 21 year old. In his first pro season he jumped from A to AAA to Chicago. He made his first and ONLY big league start on the road in New York against the Yankees. It was the second game of a July double header. 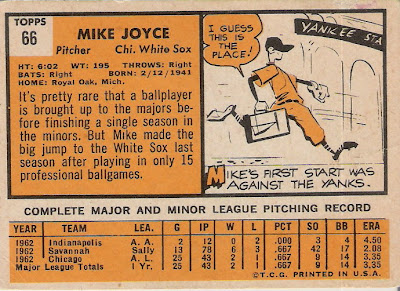 Joyce pitched 4-2/3 innings allowing 2 runs. He was also 2 for 2 at the plate. The White Sox would win that game, but Joyce was lifted one out away from getting the decision. He would never start again. He did pick up a couple of wins out of the bullpen and he finished 1962 with a 2-1 record.

In 1963 he started the year in Chicago’s bullpen but saw little work and returned to AAA where he was 13-11 in 24 starts. I am guessing at some point there was a pretty serious arm injury because in 1964 his effectiveness dropped off a cliff. He began the year in AAA, but dropped to AA and finished with an 0-13 record with a combined 7.09 ERA in 15 starts, spanning only 80 innings. He would return in 1965, but ended his career after only 5 innings.

I would love to know a little more about his career, what happened. How he went from a 21 year old big leaguer starting at Yankee Stadium to being winless in the minors 2 years later. Either way, as a big leaguer he won twice as many games as he lost AND in 7 at bats he had a career .429 batting average! Not too shabby. Plus he will always have a place on the 8th page of my 1963 Topps binder with a pretty cool looking card…

Thanks again to the blogging legend known as dayf for the hook-up and the blog fodder and thanks to y’all for reading. Thanks to Mike Joyce for throwing a baseball so many years ago... I love this hobby! Oh, this card o' the day happens to be from a set that I am chasing. I don't need this card, but I do need a bunch... Find my list HERE! Roller derby is back! Tomorrow night, June 5th: Bradentucky Bombers vs. Gainesville Roller Rebels. Be there!!! Go Rays! Troll out.

Posted by Collective Troll at 2:23 AM