Well, it has happened. Full on relapse, in full effect.
While doing some random shopping at the last remaining K-Mart store in the state of Florida, we came across a few packs of 2009 Heritage baseball.

They only had three packs there, so naturally we got them all. No boxes of Heritage, though. In fact, They had no boxes of any non Upper Deck product. No wonder all of the other K-Marts went under…
The pegs were in retail peg casing (I’m sure there is a term for these, but I don’t know it) and were just dangling there, begging to bought and liberated from this store that it seemed time had forgot. In fact, as we wandered around this particular store, it seemed as though these three packs of bubblegum cards may have been the only item from this decade for sale in the store.
No matter about the store’s ridiculous retro wares, I really just wanted some cards anyway.
I was super patient and we went out for some miso soup and edamame, which was awesome! We also stopped and grabbed a little crazy bread from Little Caesars for some post card opening snacking. 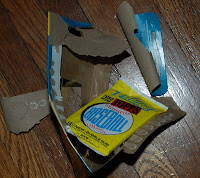 I was prepared to rip the cards as soon as we walked up the stairs, but not only were they sealed up in the weird retail packs; they were glued in there, too! I am wondering if this is specific to K-Mart. I hope not, cuz I don’t like it. It took like 5 minutes to safely separate the 3 packs from their retail cages and I even had to enlist the aid of knife to sever some of the glue, but I did and they were ready to open.

I took 2 packs and Ms.Troll grabbed herself one. I went first and grabbed a Carl Crawford (#166) first out of the pack.

Craw had another great game today, with two more hits, and as earlier stated, he is my fav Ray, so yay!
I also got another really cool card in this one.
A “Young Hill Stars” card featuring Scott Kazmir, David Price and James Shields.

The title sounds like a really goofy, teen, reality drama show that I would probably watch, but deny publicly. The picture is equally goofy, but I love it! Great pack. I am not too familiar with 1960 Topps cards. I had a Yaz rookie that I bought at a card show, and then sold an hour later, but I don’t think I’ve paid that much attention to the 1960 set. Were there “Young Hill Stars” cards in that set? I would assume so; Topps has never let me down with its authenticity.
Wife’s turn! She grabbed the first insert.

A flashback card of Bill Mazeroski, showing him being mobbed by fans after his walk off home run in the 1960 World Series. The pic is really bright and looks too photoshopped, but has a neat Leave it to Beaver quality to it.

She grabbed a Corey Hart, he wears his sunglasses at night, it never gets old…She also got a Lou Pinela manager card. 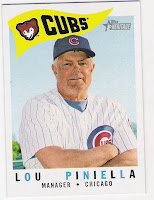 His card is in vertical format, unlike the regular horizontal cards. It also has a cool cartoon, contrastingly horizontal.

My turn!
First outta the pack is Vlad Guerrero, who is looking more and more like Rick James these days.

A Ryan Dempster card, with the back suspiciously a different color than the rest of the cards.

Turns out it is a short print, but it’s the only one we got, so I have nothing to compare it to.

I rounded out the last pack by getting our first double. Not very good odds. 3 packs, 24 cards and only 22 different. The culprit?

Colorado third baseman, Garrett Atkins. Anybody want one of these?

I rounded out the pack with Ichiro (Suzuki) and Kurt Suzuki.

2 Suzuki’s consecutive to round out my last pack, kinda neat. I don’t know how many cards are in this set, but I’ve got 22 down and many, many more to go!
End notes:
I can foresee purchasing many more packs of this product, I like it!
I will be changing my name to Side of Bacon tomorrow and me and my lovely wife, Esther Gin N Juice will be in Gainesville, Florida as her and the rest of the Nuclear Bombshells take on the Gainesville Roller Rebels. I will back on Monday, hopefully with pictures and stories of victory!
Speaking of victory…Congrats to the Rays for putting together a winning streak. Some serious hot-hitting and gutsy play from everyone, but major shout-outs to BJ Upton and Ben Zobrist!
Thanks to everyone who wrote me about trading! Keep those trades coming!
Go Rays!!!! Fourth is fine in May, but October comes quick!!!!
Posted by Collective Troll at 9:11 PM