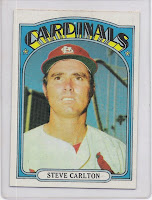 i have been toying with the idea of creating a sports card related blog for a few days now. a few days is much like an eternity to me when i start wanting to do something... i wrote some cool anecdotes in my head, but they are all gone. i signed up and i am left with a blank page, so i figured i would start to write something, but its really just blabber and babble...
i started collecting when i was a kid, i don't think that is really all that unique, but... i got really into it, my mom drove me around to card shows and flea markets and i found employers (mainly neighbors with tall grass or snow filled driveways) willing to exploit my eager child labor and most of that money was spent on 2-1/2" x 3-1/2" little slabs of cardboard. the first set i tried to put together was the 1984 Topps set. it started with buying a pack at my local convenience store, i think they were 35 cents there, but it lead to so many places. i realized that there was a card shop just a bike ride away. there i learned about penny sleeves, price guides, top loaders and 9-up pages. i started going there just about every day and staring into the glass cases and making a mental list of all the cards i was going to buy someday. at the time, i was a huge Steve Carlton fan. i don't know what it was that drew me to Lefty, but he was a god to me and i decided the first time that i went into that shop that i would one day own every card ever made of Steve Carlton.
i also chatted a bit with the guy behind the counter, i told him how i was collecting 1984 Topps and he sighed because that was obviously beneath a guy with a mint condition 1963 Topps Pete Rose rookie card sitting right in front of him. I asked to look at it and he said no. "That card is way out of your league" he said, then probably started yammering about how Pete Rose was a first ballot hall of famer, blah blah. It was 1984. 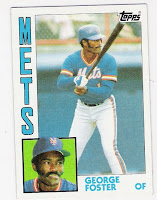 I told him all the things that I wanted to buy, and he listened. I was the only customer in the store at the time... I told him I was looking for a job, but most places didn't want to take a risk on a 9-year old with no experience. He asked me the magic question, "Do you want a way to make some quick cash?". Duh. "Yes!" i screamed and my voice was even higher than it is now... He said if i was ripping packs of '84 Topps, there were 2 cards he would buy as many as I could get my hands on. 3 dollars a pop for every mint condition Darryl Strawberry, Ron Kittle and Don Mattingly card i brought to him. He even gave me a few free top loaders for transport. I was hooked then and there. I could not peddle my bike quick enough to get home and sort through my cards in search of paydirt! 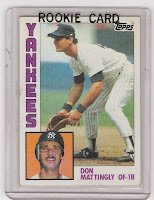 Posted by Collective Troll at 12:16 PM