Rays Win, Rays Win!!!!
Rays are at .500, Rays are at .500!!! Yes, with a decisive victory over the other team in Florida, the Rays are even up once again. That still leaves them in 4th place in a 5 team division, but they are only 4 and a half back of the Canadian team which is holding first place in the American League East.
It was an awesome offensive day for the Rays. 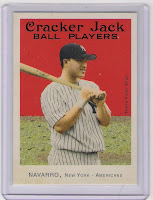 Dioner Navarro, who has been struggling at the plate and looking up at the Mendoza line for most of the year, had a break out game, going 4 for 6 with 3 RBIs and improving his batting average to a robust .211. Pena and Gabe Gross (still don’t have a card of Gabe) also went yard. While Navarro’s average jumped, Jason Bartlett was 1 for 3 with 3 RBIs and his average dropped to .375. Come on Bartlett, you can do better than that!
More impressive than the offense, was the pitching. With Troy Percival and

Scott Kazmir going on the DL today (joining side-armer Chad Bradford), the staff is looking thin. Not to say those 2 will be missed, their combined ERA is around a 7!
Still, after Matt Garza and James Shields, there is a huge drop-off in quality starts. Sonnanstine needed to come through and he did. He even got to swing the bat a little. He was 1 out of 4 with a walk.

He scored twice. With Kaz out, that bumps Andy up to the #3 starter, I have faith in Andy, but this makes me scratch my head more than ever over the off-season dealing of Edwin Jackson to the Tigers.

Jackson is 4-2 with 48 strike outs and a 2.55 ERA in nine starts. Those numbers would make him the Rays ace. Instead, we have Matt Joyce who has exactly 1 hit for the Rays this year. Great trade…
Dale Thayer(no card, sorry), who got called up with Reid Brignac to fill the vacant roster spots left by Kaz and Percy, made his Major League debut (at age 28) and pitched well. He went 3 innings for the save, giving up one run in the 9th on an RBI single by Dan Uggla. Good show.
Jeff Nieman will get the call to start tomorrow against the Fish. He’s gonna try and become the team’s first 5 game winner. Like Sonnanstine, this is a huge opportunity for Nieman to step up his game and prove he was worthy of a 1st round draft pick. If you will indulge me in a little bit of trivia… When the Rays took Nieman with their 1st pick in the 2004 draft, it made history as 3 of the first 8 players chosen were college teammates. Jeff was taken 4th overall, chosen after the Mets grabbed Phil Humber with the 3rd pick. The Orioles used the 8th overall pick to grab Wade Townsend. It was the first time a single school produced more than two top-ten picks since the amateur draft was initiated in 1965. To take it one step further, no school has ever produced 3 pitchers taken in the first round. Can you imagine facing that Owls team?

They were National Champions in 2003 behind Jeff Nieman’s unbelievable 17-0 record. He was hampered by injuries as a junior in 2004 and posted a less impressive 6-3 record, but the 6’9” tall right hander showed enough in ’03 for the Rays to covet him. I’ve only seen him pitch a few times; he has an outstanding slider, but has as many walks as strike outs and gives up more than a hit an inning. I believe he can be a front line starter, I can see the stretch rotation for the Rays being Shields, Garza, Nieman, Price and Sonnanstine. Time will tell. For now, I will happy if he can pick up his 5th win. Go Rays!!!
On a completely different note… I finished making the trophies for the Roller Derby bout tomorrow night.

I make 4 trophies for each bout; they are given to each team’s 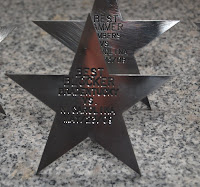 “best jammer” and “best blocker” immediately following the game. I take a little bit of pride in making these; let me know what you think...Incidentally, the star is an important symbol in roller derby. The "jammer" has a star on their helmet to set them apart from the rest of the pack. The jammer is the only one on the rink who can score. Go Bombers!!!
Posted by Collective Troll at 1:13 AM