The Tampa Bay Rays!!! On Cardboard Via 2012 Topps Gypsy Queen, Courtesy of Kyle from the JABO Blog!!! 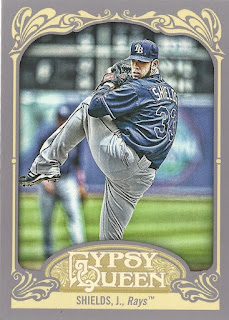 Greetings Trollites!!! Tomorrow I take my final FINAL EXAM. This means my hiatus from blogging will be over soon. Actually, Monday I will be shipping out a bunch of cards, getting caught up with everyone that I owe - I will be buying some more pages for the binder and doing more organizing and keeping my want lists up to date...
Though I haven't been posting, I have been watching the Rays every night. The comeback on Monday night, capped off by Elliot Johnson's walk off single was awesome! Aside from the first inning, Big Game James Shields has looked great tonight. My guy Sean Rodriguez hit a homerun and the score is tied. The Rays are without Evan Longoria for at least 2 weeks, maybe a month or more... They don't really have a back-up third baseman anymore, but they have a ton of second baseman who can play anywhere... Former Tigers 2nd baseman Will Rhynes was called up from AAA to play third base tonight and just turned a double play... Between him, Jeff Keppinger, Elliot Johnson and Sean Rodriguez - I think they can handle things for a little while...

Anyhoo, I participated in a really awesome group break with the King of the Group Break - Kyle from the Juuuust A Bit Outside blog... I think he has done about 20 breaks this year alone and has a lot of happy collectors... I wanted some 2012 Gypsy Queen and for just 9 bucks I got 2 boxes worth of Gypsy Queen Rays shipped to me... I had planned on posting all of them, but I am exhausted and need to study, so I will just quickly post a scan of the 4 minis that I received from the break...

Thanks again Kyle! Juuust a Bit Outside is for real one of the best new blogs out there and a great spot for group breaks. He has the Troll seal of approval!
I have everything scanned up and will post in a few days, gotta get to work, get to bed.... Its the botttom of the sixth inning, the Rays are up 5-4 after Luke Scott just hit a solo homerun... Centerfielder Michael Saunders knocked the ball over the wall with his glove, but it counts as a homer, so I will take it!
Oh, couldn't resist posting 1 full sized card... Go Big Game James Shields!!! Go Rays! troll out.
Posted by Collective Troll at 9:11 PM