An Addition to the Family, Plus a Blaster of O-Pee-Chee

This weekend our family got a little bit bigger… Joining Esther Gin N Juice, myself and Sally Stitches in the Troll household (which isn’t actually under a bridge) is a fifty pound baby girl named Emma Estrella Margherita Bacontowne (Troll). 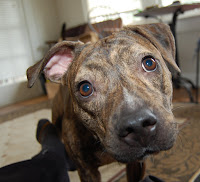 She bears little resemblance to her mother (or father) but we both could not be more proud of our little bundle of joy.

As part of the celebration of the birth (arrival) of our youngest daughter, Esther Gin purchased a blaster and a few packs of 2009 O Pee Chee. I have been dying to check this product out for a while. I’ve even considered collecting the whole set. 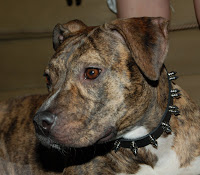 We ripped the blaster (and a few bonus packs) while our baby sat beside the bed and watched with fascination. I don’t think she quite understands why her father gets so darn excited about certain little bits of cardboard. Anyway, expect lil Emma to make frequent appearances in the blog. We have not yet put her on skates, but she does have a derby name already. Emma Bytcha.
I really liked the OPC product a lot; I think this is one that I would like to build a set of. I understand why people are really getting into this. With our new situation, new mouth to feed, diapers (bones) to buy, etc. I think I am gonna have to hold off on trying to finish this set, but… I did luck out and pull a few Rays cards-Ben Zobrist, Matt Joyce and Jeff Niemann 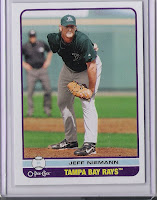 (oddly with a very old photo) and a team checklist. The checklist is awesome cuz it lists the names and numbers and makes making my want list really simple.

I think that it is pretty awesome that OPC included 21 different Rays cards in this set-that makes it awesome! It also includes the only (to my knowledge) Rays cards of Gabe Kapler and Jason Isringhausen. Those two will be tops on my list!
I did manage to pull 17 black parallels, one black mini of

Placido Polanco, an Award Show of the Flyin’ Hawaiian, Shane Victorino and a Face of the Franchise card of

Tim Lincecum(seriously cool looking subset!). One card that sticks out like a sore thumb is a glossy Upper Deck 30th Anniversary card of Giants Hall of Famer, Orlando Cepeda. 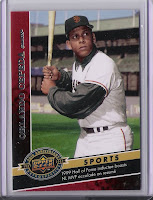 That leaves me with 76 base cards and 17 black parallels for trade,