Stoopid Pirates and a Trade With Mark From Stats on the Back!

There is so much going on in baseball right now, with the trade deadline, pennant races and rich teams feasting on the poor ones. I took the night off work last night, for the first time in weeks. It was my final night of speech class. Although I am glad that it is over, and I am more pleased that I got an A, I am going to miss the class and miss all the research and I am going to miss delivering speeches that kept the much younger kids in the class interested and asking questions. After we (the wife and I were in class together) both aced our final speeches and both got an A on the final exam, we came home to celebrate, get drunk and hopefully watch the Rays beat the Yankees on TV. We did succeed in getting wasted, as did the Rays. They were shut out by Joba for 8 innings. They did manage a rally in the 9th, with Crawford leading off with a triple and Longo hitting a long ball to bring them both home with no outs. Joe Girardi brought in Mariano to finish the game after Pena doubled, but he was stranded at second, Mariano shut it down and the Yankees won 6-2. Blah. Then I switched over to ESPN and heard about all of the trades. As I have said before, my team in the NL is the Pirates. I love the team, hate the organization. Check out the names we had in for spring training in 2008: , Xavier Nady, Nate McLough, Freddy Sanchez, Craig Wilson, Adam Laroche and Nyger Morgan. Save the final two names, all were All Stars for the Bucs. All of them are gone in the course of about a year. I was furious last year when they dumped Bay and Nady to the Sox and Yankees. I am glad that they didn’t send Freddy or Craig to , but how do you trade your All Star double play combo? Come on. I am glad I don’t live in . That really sucks. Freddy Sanchez has long been (along with Brian Roberts) one of my favorite non-Rays, but I don’t feel like ranting any more. The Rays lost; the Pirates gave away their top players, whatever…I have fallen way behind in posting trades, so I am gonna focus on that instead. Mark (great name) from Stats on the Back made an offer a few weeks back to send piles of cards out to anyone who claimed them; I claimed the Rays and he delivered quickly. 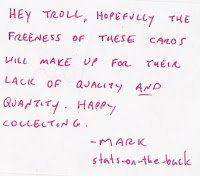 He sent a note (I love the notes!) that said he hoped the freeness of the cards made up for the lack of quality and quantity of them. You have no idea how excited I was to get these cards, Mark. I have decided to start the task (ala the Great Orioles Autograph Project) of collecting an autograph of every (Devil) Rays player ever, on card, in a Rays uniform. This means I first need a card of every Rays player and Mark delivered 6 different names to cross off of my list. Anyone who has contact info for any of these guys, or who knows their signing tendencies, PLEASE let me know!Okay, starting off with a current Ray who has not done too well of late, it’s a

2009 Goudey James Shields. I decided after one blaster that I didn’t care for these cards. The drawings just make the players look too goofy, I still want to collect the Rays and Shields was one I needed.The rest of the cards are all ex-Rays. He sent a bunch, but these are all cards of guys that I didn’t have yet.

First, a 2003 Upper Deck MVP card of Jared Sandberg. Jared lasted two seasons in the big leagues, all with the Devil Rays. He hit 25 homers for them, but couldn’t stick and 2003 was his last year with the D-Rays. He played a few more years in the minors trying to make his way back, but has settled on coaching the Rays organization. At 31 years old, I wonder if he will try and make a comeback, but I think he is a great organizational guy to have around. In ten years I would expect to see him managing at the big league level.Al Martin was a long-time Pirate, too. He never made the All Star team, but was one of the most popular Bucs of the 90’s. 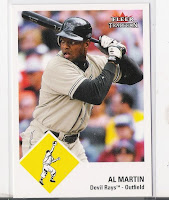 He had some issues with making up stories about playing football at USC and marrying multiple people and beating them up, but he also spent a season with the Devil Rays as shown by this 2002 Fleer Traditions card.

Next up is a card of Geremi Gonzalez (his first name is misspelled). Geremi was a huge bright spot for the Devil Rays in 2003, one of their top arms. In 25 starts, he struck out 97, winning 6 and losing 11 with a 3.91 ERA. He had great stuff, but horrible run support. Sadly, Gonzalez died at 33 years old, getting struck by lightning in last year.

Ryan Rupe was the first of the Devil Rays 1998 draftees to hit the big leagues. He was 8-9 for them in 1999. He looked to have a very bright future, but never really panned out. This is one of the few 2000 Topps cards that were still on my want list, thanks!

Sweet Lou Piniella won Manager of the Year Award three times; he also spent a few unsuccessful years managing the Devil Rays. This 2003 Topps card is the first documentation I have of that. Anyone know how Lou is as a TTM signer?
David Price, Pat Burrell, Delmon Young and Josh Hamilton were all First overall picks in the draft that played for the Devil Rays.

Lance Carter is a (the towne I live in) native and was the Devil Rays All Star rep in 2003. I have no idea what he is up to right now, so if anyone has any info on him, I would really appreciate it…Mark sent me a serial numbered (1971/1999) 2000 SP Authentic card of him, which would look really sweet with an autograph on it…As far as I know, he is out of baseball, but where is he?
The next card is pretty sweet, too.

I know where Geoff Blum is, he’s the starting third baseman for the Astros, he’s been in the big leagues since 1999 and he won a ring with the White Sox in 2005. I had actually forgotten that he spent an unremarkable year in in 2004. I have seriously never seen that many fluffy clouds in Tropicana Field before… This card is going to today…

The last card, my favorite of the whole lot, is of former Blue Jays top prospect at shortstop, Alex Gonzalez. Gonzo spent 13 seasons in the big leagues and a couple with the Rays. This is my favorite because it is somehow my first 2006 Topps Heritage card. I have been obsessed with this series, but for some reason, the 2006 set has completely eluded me so far. Anyone else have any Rays cards from this series? As a kid, one of my friends stole a bunch of 1957 cards from his Dad. I traded him a couple of Don Mattingly rookies and a Walgreens boxed set for a Hank Aaron, Eddie Mathews and Warren Spahn. I guess I was a Braves fan back then…The Aaron (reverse negative card) was the prize of my collection for a long time, but it ended up paying my water bill about 15 years ago, the others are gone too and this Alex Gonzalez card is the closest thing to a ’57 card I own.
Thanks so much to Mark from Stats on the Back! These cards made my day! Mark is collecting one card of every person to play for the Mets and every person in the Hall of Fame, go to his blog and check out who he still needs! Speaking of needs... I will post my list of former Devil Rays cards that I still need very soon. Anyone who has Devil Rays autos, lets trade! Anyone who knows where to find ex-Rays who have fallen under the radar, please let me know...
Go Rays!!!! Troll out.

Posted by Collective Troll at 1:33 PM