A contest, a contest, a contest!!! Free stuff, free stuff, and free stuff!!! Today is one of the two days of the year during baseball season that there are no Major League games on and I am a bit bored, I am home from work early and there is another half an hour before ESPN 2 starts showing the AAA All Star Game (Reid Brignac starting at shortstop!) so I am going to give some stuff away. This is an All Star themed post. There are 12 different cards (the absolute best of my small collection) to choose from, each representing an All Star player. 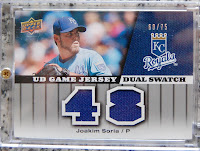 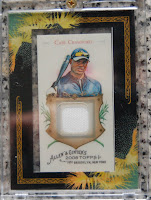 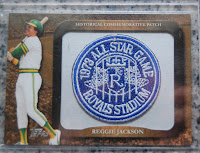 A 2008 Upper Deck Spectrum Dual Swatch (21/99) card featuring both 2-time All Star Prince Fielder and 2-time All Star Ryan Braun.
Now, I realize that I didn’t cover every team here, but I think that I threw in enough Hall of Famers to make everyone happy. If you insist, when you select, write in Pujols, A-Rod, Chipper or David Ortiz and you will receive a random memorabilia card of my choice featuring that player.
Okay, the rules. First, you must follow this blog to play. Second, you can only enter via the comments on this thread of this blog. Any entry received after midnight on Sunday July 19, 2009 (the date of the next Bradentucky Bombers bout) will be voided. You can win one or two of the cards listed above. To win one, simply comment with your name, your favorite team or player, the state or country that you live in and which one card you would like. To win two cards, do everything listed above, plus select a second card, plus vote for your choice for MVP and Cy Young for this year (thus far) in both the American and National Leagues. That easy. I will post the first comment with a sample of how to do this. My entry will be voided because I am not a follower of this blog. I, along with witnesses and a camera, will pull the winner’s name from a hat (containing all the entries) early next week. I will then post the winners first name and the card they picked and contact them for their address to send them their card. Sorry there are few options for West Coast fans, I have zero luck in pulling Dodgers or Giants cards ever. I checked at my local card shop today and no dice. Sorry. Okay, good luck!
Four quick end notes...First, every card here (other than the PSA) is pack fresh and stored in a one-screw down Ultra Pro holder and covered in a team set bag. Second, was Robin Yount only an All Star three times? I might be misreading my encyclopedia because that just doesn't sound correct. Third, the remaining cards not won will be added to a few others for another contest in August, unless an interested party wants to trade me for Rays memorabila cards. Fourth, uh...can't remember what I was going to say, umm...thanks for reading? Oh wait, the cards available are the actual ones pictured and when available, the serial numbers are listed. Okay, going to watch the AAA All Star game. Go Rays! Troll out. Oh, as an added bonus...The first person who points out the uncorrected error on the Vlad card can pick THREE cards! Oh, and the same cards can be picked by multiple people since this contest only has one winner... Remember that if you choose Cy Young and MVP, you can pick 2 cards, if not, you only pick one card. Thanks for reading!
Posted by Collective Troll at 9:59 PM