Wow… What a game yesterday. I am talking of course about Mark Buehrle’s perfect game. It’s never fun to be on the losing end, but from a fan’s perspective, it’s awesome to watch no matter what team you root for. The shear speed in which he worked the game was amazing. He had control from the first inning on. I think they said that the average at bat in the game was less than 60 seconds.

There were inning halves that were seriously shorter than the commercials in between innings. I think that by now everyone has seen the highlights of both Buehrle and Dewayne Wise’s

(card is created and borrowed by White Sox Cards blog) amazing catch. There isn’t really too much more that I can say other than congrats and thanks! Thanks to Buehrle for making history and showing that the best games aren’t the ones where home runs are flying all over the place. I had a vote on this blog last week for the mid season Cy Young Award. Around 30 people placed votes and Roy Halliday won the vote on the AL side with Zach Greinke and Justin Verlander at 2nd and 3rd. Mark Buehrle didn’t receive any votes. Maybe his ERA is a little high, maybe compared to those other 3 his strikeouts are down. I wonder if I had the same vote tomorrow, how many people would go with the lefty from Chicago? After this start his record has improved to 11-3 and his ERA has dropped to 3.28. He has struck out 76 batters in 134 innings. It was the first perfect game for a White Sox hurler since 1922 when Charlie Robertson blanked the Tigers. It was the first in the Majors since Randy Johnson blanked the Braves 5 years ago. It was the 16th Perfect Game since 1881 and Buehrle became the 6th pitcher to have both a perfect game and a no-hitter in the Majors. The other guys? Cy Young, Jim Bunning, Sandy Koufax, Addie Joss and Randy Johnson also had the ultimate pair of dominant games. Not too shabby for a 38th round pick out of Jefferson…
I was planning on doing a post about Tom Seaver today. My wife found this picture of him and a terribly goofy looking kid, circa 1985. 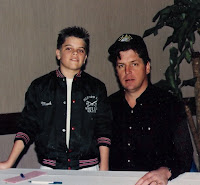 Tom Terrific never threw a perfect game, but he did throw a no no in 1978. He also managed 12 trips to the All Star game, 3 Cy Young Awards, a Rookie of the Year Award and a World Series ring. Oh, he also won 311 games and struck out 3,640 batters in his career, but he never pitched a perfect game.
Congrats again to Mark Buehrle and the Chicago White Sox! Nothing like a perfect game to throw in some positive momentum for a pennant race.
Posted by Collective Troll at 2:02 PM