A Little Bit of Babble AND Thanks to Smed's Cards - I NOW Have a Wantlist for 2012 Heritage!!! 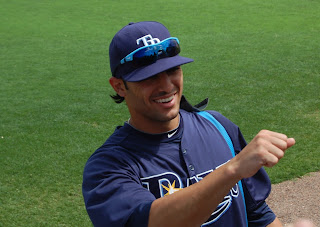 I will post this list on the side bar soon... I have a big test tomorrow night in Statistics and I NEED to study... I wanted to get a list out there cuz I know a lot of folks are tearing this product up... I have only been able to buy 2 packs myself so far, but THANKS to my buddy Scott from the Smed's Card Blog I now have close to a third of this set!!! I mean, imagine this... I got last Sunday off last minute and my wife had to work... I shot an email to Scott to see if he was free to check out a game. Fortunately for me, he was. He drove over 3 hours to meet me in Port Charlotte to see his home team, the Miami Marlins take on my home team, the Tampa Bay Rays...
It was AWESOME to meet a blogger face to face. We all e-mail each other so often and read about each other's lives - its like we really know each other and know probably more than some of our friends... Seriously, us bloggers really hang it all out there for anyone to read. Anyway, it was awesome to meet a blogger, we had a good time - the game wasn't bad, the seats were decent, I got to see Hanley play third base and saw my favorite pitcher Wade Davis start the game... Davis started strong, but got flustered and yielded a solo homer, a walk and then a 2-run homer in one inning. Shortly after that game it was announced that he won't be in the starting rotation this season... No worries, having Wade Davis as your long man in the bullpen is GOOD thing!
Anyway, we had some great conversations, soaked in the sun and saw some big name players up close. All that was cool, but check this out... Upon meeting Scott he handed me a large hard plastic Ultra Pro card box FILLED with Heritage singles... I felt bad - I didn't show up with gifts! Last night I sorted all those cards and mixed in the 16 cards I already had and suddenly I have one third of the set!!!!!!!!!!!!!!!!!!! Blogger generosity blows me away. Thanks Scott!!! The Marlins ended up winning the game and all but 1 Rays starter was lifted by the sixth inning and replaced with "Minor League Guy". One starter played all nine innings, got really dirty and played solid. When the final out was recorded this dude stayed on the field and signed autographs for EVERYONE there...
He easily wrote his name about 300 times on cards, shirts, balls, hats, programs, whatever fans handed to him. There were SO many youngsters who got their first autograph ever that day and Sean Rodriguez earned himself a number of new fans... I quickly scanned my new box of Heritage, but found no SR cards. I didn't bring a baseball and the Rays cap I was wearing was solid black and I didn't have a silver sharpie, so I STILL need a Sean Rodriguez autograph... I seriously only own 2 of his cards and one is a mini and the other is a refractor. I would def like to build up my Sean Rodriguez collection. Not only is he a super nitty gritty player, he is a damn solid middle infielder, great on the base paths, getting better with the bat, but he is AMAZING with the fans! If you weren't sure if there were any Sean Rodriguez
super collectors out there - you can find one here!
I was a little bummed to not get his auto, but it made my day (which was great already) to watch him sign for EVERYONE after the game... Awesome! I did get dap and I yanked him in for a hug and slipped my Troll Bizness Card into his equipment bag, so I may have a new reader, ha! 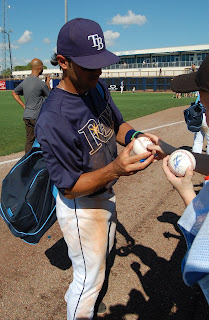 Number of Cards I have: 177
Number of Cards in Set: 500
What I Need: 323
Completion Percentage: 35%
List Created – 03/27/2012
List Updated - 03-29-2012
Thanks for reading my list! I am running pretty low on cards to trade away, but if you can help me out, I will do my best to make it worth your while... I still do have some Ginter minis I could be persuaded out of... I am also still looking for someone willing to take on my Jason Bartlett player collection which has (I think) 9 autographs and a few relics in it... I also need someone to grant a home to my Carl Crawford collection as well. This WILL cost ya... I sold some of the autos and printing plates on eBay, but still have at least 5 autos, 5 rookies, about 20 relics, a ton of refractors and parallels, at least one 1/1 and over 500 different cards of him. I spent about 3 years aggressively buying and trading for his cards and have hundreds of bucks invested in this... I am not looking for a return on my investment, but if you want it, be serious and be ready to give me something attractive in return... My Aki collection is pretty cool - not nearly as many cards as CC, but more autographs... I don't mind hanging onto this one, but if there are Aki fans out there, I could share some with ya... I already parted with my Aubrey Huff and BJ Upton collections... This leaves just Scott Kazmir, Jonny Gomes and Rocco Baldelli left as the only X-Ray collections I have... I would LOVE to find a good home for all the Kazmir's... I would love to know what the heck happened to him, really... He was sooo good, so young and so left-handed... Gomes is still my favorite player, Ray or not and Rocco was all we had for a while so I don't mind holding onto them. Jared Sandberg still rocks! I still also have decent collections of Joe Kennedy, Dewon Brazleton, Ben Grieve, Q McCrackin, Fred McGriff, Vinny Castilla... If you seriously collect them, let me know... I want to build a serious PC for Sean Rodriguez, I wanna fill a page of Manny Ramirez and I am always looking for cards of Jennings, Longo, Price, Moore, Wade Davis, Zorilla, Hellickson, Pena... Alex Cobb and Jake McGee are also among my favorite future stars... Wow. Was any of this relevant? Ha! Is anyone reading? Una cosa mas... If you are on my blogroll and we have NEVER traded, we need to fix this. Get in touch, okay? Go Rays! troll out.
Posted by Collective Troll at 9:07 PM