Remember Me? And Looking for a Ryan Braun Collector to Trade With and some blah blah blah... 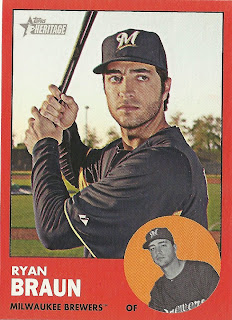 So, it has been about a month since my last post, so I figure I am due... I have received SO much great stuff in the mail this past month... Smeds Card, Maddux, Glavine and Smoltz, Cards on Cards, Dawgbones, Democratic Roadkill (HUGE!!!), plus several of my awesome readers have all blessed me with packages which I appreciate SOOO much!
I am staying very active in collecting... My budget has been small, so I have been spending my time sorting and organizing... We have a fancy antique wood bench in our dining room. It has become the spot for me to stack cards to send off for surprise packages to my trade buddies...
Yesterday I sent out 8 such packages. I have 11 more stuffed and ready to go... I hate that they are sitting in my dining room still, but postage aint cheap... I am hoping that next Thursday all of them will be en route... I am trying to trade away EVERYTHING that isn't a part of a set or PC that I am chasing.... I put together over 2600 cards to send out for my blogger brethren and a couple 100 are on postal trucks as we speak. If yer curious - folks living in the following zip codes can expect a package from under the bridge real soon - 55418,16101,30052,98105,22031...
I also have over 5000 cards ready to go to Commons 4 Kids! I am super excited about this donation and already have a second 5000 count box in the works. The only problem I am facing is that when I took this to the Post Office to ship I was told it would be $38.! The box came back home with me. I am open if anyone has any suggestions for getting these out a little cheaper... Commons 4 Kids seems like a super awesome organization and I totally support and recommend them and encourage you to click this link and check them out...
In other card news, my wife surprised me with a jumbo retail pack of 2012 Heritage yesterday... I had not realized that it was out just yet, I need to pay a little more attention I guess. So, longtime readers of this blog may know that I am a pretty big of Topps Heritage. It was the product that got me hooked back into collecting and while collecting the 2007 Heritage set and trying to google a checklist of short prints I stumbled upon this AMAZING blog which led me to more blogs, like this AWESOME blog and this AWESOME blog and ultimately led me to start blogging (and BTW all 3 of those blogs are STILL around and are still 3 of the BEST) , so thank you Topps Heritage!!! On a negative note - I spent many hundreds of dollars buying box after box of 2007 Heritage (I included over 2000 dupes in my Commons 4 Kids package) AND spent nearly 2 years blogging and aggresively trading before I finally finished that set...
I had 2008 Heritage nearly complete, SPs and all, when they dropped Heritage High Numbers... Around 2010 I finished that one. I am still working on the 2010 set and did not buy a single pack of 2011. One of the reasons that I stayed away from the '11 set was that I was sooo excited about the 2012 set as it is based on '63 Topps which is one of my favorite sets of all time and is also a set that I am chasing... SO, I am super psyched about 2012 Heritage! The stupid budget isn't gonna allow much along the lines of wax in the near future - I may be able to rip a blaster here and there, but I will relying HEAVILY on trading, so keep me in mind as you get dupes, PLEASE! I will explain how and why later, but I have many, many Allen and Ginter minis available to trade. I also have quite a few 1963 Topps cards (especially if you are an Indians fan), along with some random other cards from the 60s and 70s and many 2010, 2011 and 2012 Topps cards.
I also have this card which came from the jumbo pack that Super Wife got for me. It is the RED SP parallel version of card #276 of reigning NL MVP Ryan Braun (shown at the top of this post). So far 3 of them landed on eBay, one has sold and for pretty good money, too... I would, of course, much rather trade it with a blogger, perhaps for one of the 27 Ginter minis that I need to finish my Frankenset, whatever, I am open to offers, just get in touch if you wanna make a deal, okay? Anyhoo... Stay tuned, I just might make a second March post, MAYBE a third... I might even drop a spring training update or some of my opinions on the Rays and the Pirates...
I believe those 2 teams are facing off this Saturday afternoon and the Wife and I MIGHT be attending... As always, thanks for reading - I will do my best to be a better blogger. I do seriously have some things in the works and many plans for this season. I do apologize for the lack of images. I hate expecting people to just read words with no photos to keep it interesting.... Gotta go though, Wifey is waiting!
Go Rays!!! troll out.
Posted by Collective Troll at 10:31 PM