What is a Pujols Autograph Worth These Days?

Tonight I saw a lady wearing a shirt that read “Happiness is Yelling Bingo!” For me, happiness is having an awesome wife. Happiness is the new dog not defecating on the rug.

Happiness is the Rays not trading away any core players or prospects at the deadline. Happiness would be finally finishing one of the 3 Topps Heritage Sets that I have been working on since the dawn of time. Chris from Tacoma, Washington is trying to make me happy. Not because he introduced me to my wife or because he knows how to train a stubborn puppy, but because he ripped just as much Heritage as I have these past three years and he is willing to share. I always mention that any card I post a scan of on this blog is up for trade. I try and use my best cards whenever possible to try and draw trades actually. A few weeks ago (The Readers Choice MVP Post) I put up a SP autograph card of Collective Troll’s Fan Vote MVP, Albert Pujols. I received a few e-mails from other bloggers asking about it, but Chris is the only one who actually made an offer. The offer that he has sent to me was pretty much mind-blowing, I wrote back to tell him that, but he said that the card was selling for about $300 on eBay, so I agreed to take his offer, but I still feel a little guilty about it…
He hooked me up with 3 cards off of my Magnificent Seven Most Wanted List 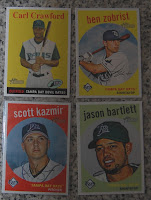 (which I will revise soon), an amazingly cool Carl Crawford patch card with the lowest serial number I have ever seen in person (02/25). 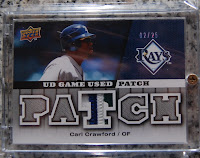 It is my first CC patch card and only my second patch card total. I have a Roy Halladay patch (#15/25) from the same set, but just like Roy-I haven’t received any serious trade offers on it… Anyway, he sent along about a dozen other CC cards,

a BJ Upton jersey card, about 20 Scott Kazmir cards (3 jerseys), but the true awesomeness came from all of the Heritage short prints that were in the box.

He did send a long a huge stack of 2008 Topps Heritage, too. He included the Kazmir SP, Ben Zobrist and Jason Bartlett’s from that series. Between the low and high numbers, he sent 18 short prints putting me within 4, count ‘em 4 baby, cards of completing the base 1-500 card set. 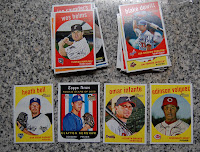 I am also within 39 cards (mostly SPs) of closing the book on the high numbered set, too. Apparently that tapped him out of Rays and Heritage cards both, but he didn’t feel like he was sending me quite enough. He sent a message asking what else I collected. The short answer is nothing. I build sets and I collect Rays cards that is really it. I like having cards for trade bait and I do have a few players that I collect a little. I gave him the list of those guys and also told him that I wanted to stock up on Orioles cards as they will be Spring Training in my little towne next year. Well, he sent me two Josh Johnson

(the Marlins TALL righty) jerseys, a Jeremy Guthrie (Orioles) jersey and a couple cool Ryan Zimmerman cards. I guess there are a lot of people who like Hanley Ramirez and Brian Roberts (my other two favs). It seriously feels like X-Mas with all these sweet new cards under the tree (all over my bedroom floor). It feels even better knowing how much closer I am getting to finishing my sets. I am going to seriously be crossing my fingers, hoping for another Pujols autograph pull with every pack I rip! Thanks so much Chris, for the trade and all the cool cards! For anyone interested in helping with my quests, my Heritage want lists are updated at www.collectivetroll.webs.com. I didn’t start collecting till 2007, but I do want to get all of the Devil Rays cards from the prior years of Heritage, get in touch if you can help. Cheers! Go Rays! Troll out.
Posted by Collective Troll at 4:21 PM