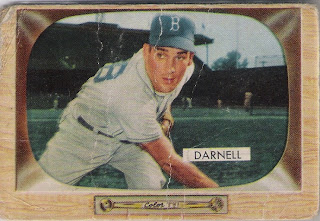 Many months ago I won a contest over the Vintage Sports Card blog. Along with the awesome card I won he included a few extras including today’s CT Card o’ da Day…

From 1955 Bowman baseball (the TV set set) is card #39 of Brooklyn Dodgers right handed pitcher Bob Darnell. Now I love pretty much all the Bowman sets from the 40s and 50s, so pretty much any card from these series’ can hop right into CodD status, but this one has a special advantage – Mr. Darnell is a native of Wewoka, Oklahoma.

I don’t know a ton about Bob Darnell. He was signed by Brooklyn in 1953 after he left the Army. At 22 years old he went directly to AAA and by the next year he had his first cup of coffee with the Dodgers. He appeared in 6 games without a decision, but had a respectable 3.14 ERA. He went back to AAA and didn’t return to Brooklyn again until 1956. This stint was far shorter, lasted just 1 game, a little over an inning. He faced 5 batters in relief, sat down four of them and didn’t allow a run. He would go right back to AAA where he pitched until he was 30 years old in 1961. As a pitcher in the high level minors he posted an 83-94 mark with a 4.06 ERA primarily as a starter. 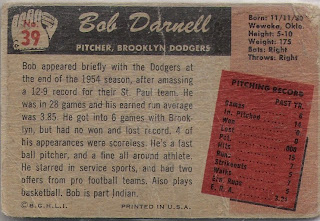 Throughout the decade of the 50s, with all the great Dodgers teams Darnell was constantly waiting in the wings, but never really got an extended look. He is however the only player from Wewoka, Oklahoma that I know of to make the Big Leagues. He is not, however the only pro athlete. There have been several, but none as successful as the golfer Gil Morgan. Stay tuned for more Oklahoma-born baseball players and more rad cards from the 50s, 60s and beyond! Go Rays! Troll out.
Posted by Collective Troll at 11:16 PM