Rolling Out the Hits - 2011 Topps Series 2, Everything MUST GO To Make Room for Allen and Ginter! Come and Get 'Em!!!

Okay, I posted a bunch of my parallel hits from 2011 Topps Series 2. Some have been claimed, but a bunch are still available… I am a little surprised. Nobody wants King Felix in gold? Emerald City? Anyone?
I am not going to repost all of the gold cards. You can find them here. I have only had 4 trades from these cards. I think there is def another trade in there, so get in touch, okay?
I still have a few more hits to post. I actually saved the best 2 hits for this post. Honestly I thought the Blake DeWitt black parallel, number 13/60, was the big hit of the box. I may have been incorrect. 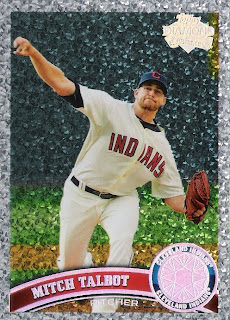 Leading up to the best of the best is a Diamond Sparkle card of former Rays pitcher Mitch Talbot. Talbot is shown as an Indian and I believe he still resides in Cleveland. He won 10 games for the Tribe last year, but he sits at 2-6 this year. I think he is saving it all for the Postseason…
I am at work right now and am working with a kid named Blake. He has no idea who Blake DeWitt is, but thinks guys named Blake need some love, too…
Okay, here is a biggy… I have thirteen (yes, 13!!!) Diamond Giveaway Cards. Normally I redeem these the SECOND I pull them.

I don’t know how I have had so much restraint with these, but they are not yet redeemed. I don’t know yet what to do with these. I will take offers. Maybe I will redeem them; maybe they will become a contest perk. Whadd ya’ll think??? I open to suggestions… 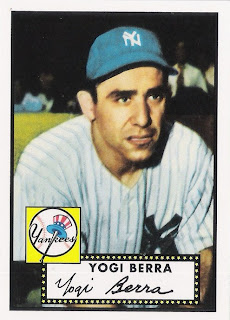 Back to the big hits… I was REALLY psyched to pull this ORIGINAL back card of Yogi Berra, 1952 Topps… This is as close as I am to a 1952 Topps card of any kind, especially a HOFer, so... Good stuff and def up for trade… 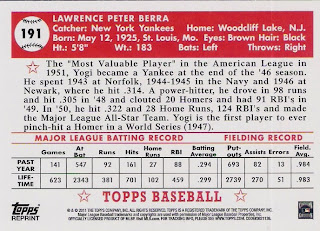 I do need just a dozen more cards to finish off Series 1 and 2. My want list is up to date and you can find it here. I bought 1 retail pack while at Target yesterday and I pulled a card I needed!!! I got a Kimball mini, too. It was 2 bucks well spent… The card I needed, by the way, is current Rays DH Johnny Damon. I got a bat card of Damon while a Red Sox, in a trade last week. I am ready to re-trade it if anyone is interested. It is from Topps T205. No scan available just yet. 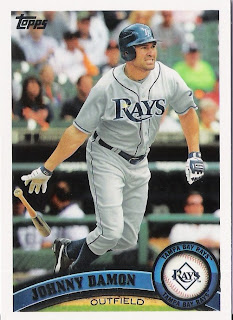 For the record, I am a fan of Damon as long as he is with the Rays, but I am not collecting any non-Rays cards of him…
Okay, I have been here at work for over an hour and I haven’t done a damn thing yet. I SHOULD get to work… The BIG HIT of the box is this. A short print, Diamond SPARKLEY card of Giants Hall of Fame pitcher Juan Marichal. I love looking at his career starts on the back. This dude had all the magic numbers. 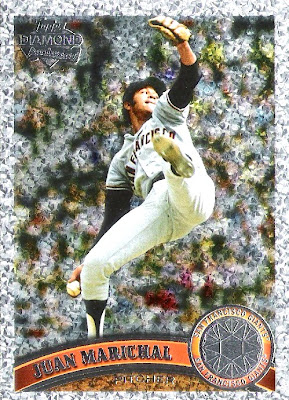 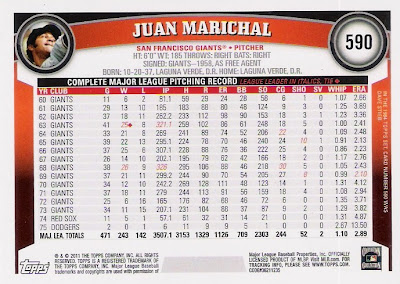 Y’all know the rules. Claim in comments and send me an offer in an e-mail. Once again, my 2011 Topps Needs list is HERE!!! Oh, this isn't my last 2011 Topps post... I have a few cards I REALLY like from this series... I plan a post of guys with their GAME FACE ON! Like Mr. Walden here. 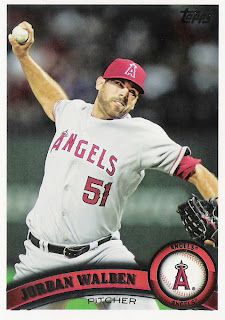 He is READDY! Go Rays! Troll out.
Posted by Collective Troll at 9:46 PM