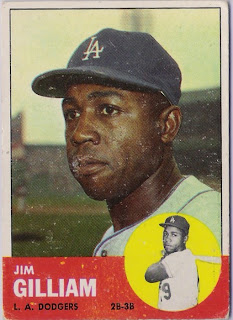 Anyone who reads this blog regularly, or did about a year ago, knows that Jim "Junior" Gilliam is one of my favorite players from the 1950s and 60s. I am trying to collect all of his regular issue Topps cards. I have owned a few, but like everything else that isn't part of one of my main collections, I will trade them away when I get in a bind... Since I started blogging I have owned and traded away 3, yep three, 1963 Jim Gilliam cards. In case you need proof, consider this Exhibit A as shown from February 2010 on the best blog out there...I thought about them when I decided to chase 1963 Topps. I vaguely regretted trading them away, but only for a second. That is because I KNEW he would come back to me. It took a month and a half, but I got a surprise package from a reader in Hawaii and sure enough it had today's CT Card o' da Day in it!!! The CT CodD is my BOOMERANG card, card #80 from 1963 Topps baseball of Dodgers infielder Jim "Junior" Gilliam. The back of the card mentions that Gilliam walked 100 times in his rookie year. He also scored 125 runs and hit 17 freakin' triples!!! Of course he wasn't really a rookie... 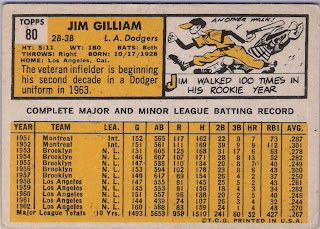 He had already been a Negro League All Star, but I guess in the National League he WAS a rookie and he won the Rookie of the Year Award. Yeah, Jim Gilliam is pretty awesome and I like that his cards double as boomerangs... Heck, I might trade this copy away too, just to see if it comes back! Go Rays! troll out.
Posted by Collective Troll at 10:17 AM