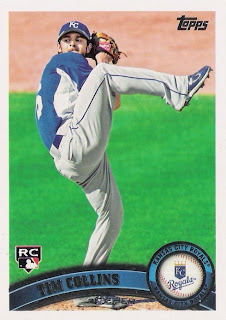 Trading has been SPORADIC for me in 2011… I have made a number of trades with readers, but months pass in between blogger deals and then I make a whole bunch all at once… I am knee deep in a trading frenzy right now and I am gonna try really hard to not get all behind in posting these… I had 5 envelopes in my mailbox today and everything was super awesome stuff I needed. I am going to start the Troll’s Trade Train off with a deal I made with Justin’s World. He bit on a couple of trade bait cards that I had posted and we worked out a deal quickly that whittled my 2011 Topps need list down. Both big cards and little ones… He sent over a dozen or so full sized cards from my list. My favorite is this one, card #471 of KC Royals reliever Tim Collins. Collins is a really great story. He went undrafted, but was signed by the Blue Jays at age 17 and started pitching for their rookie league team in the hot Florida sun right away… The Jays traded him to the Braves who sent him to the Royals. At just 21 years old he had 4 years of minor league experience and made the big club in KC and is one of their most used pitchers. So far this year he is 4-4 with a 3.50 ERA out of the bullpen. His 43 appearances ranks him 8th in the American League and he has fanned 40 in 46 innings. Oh and he is FIVE-FOOT-SEVEN!!!
And speaking of minis… (another perfect segue) Justin also sent me 3 really cool looking 2011 Topps Series 2 Kimball Champion minis that I needed. It seemed in Series 1 that it was mainly current players, but all of the Series 2 minis are of legendary Hall of Famers, well most of ‘em are in the Hall... 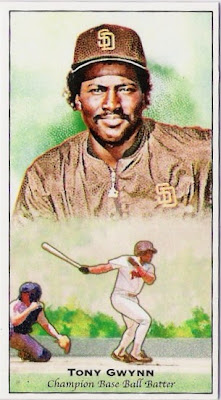 The last legendary mini he sent is card #KC53 of Hall of Fame catcher Carlton Fisk, shown in Boston red. 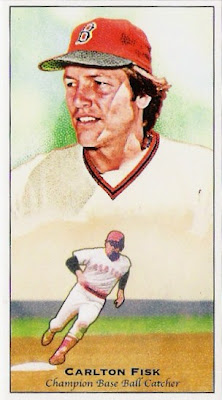 If you want to be like Justin and hook me up with some sweet Kimball minis, check out my wantlist and get in touch… With Tim Collins safe in the binder I need just FIVE MORE cards to finish off Topps Series 2… They are 388,523,574,582 and 639 and I will gladly accept them from you, just get in touch… Thanks again Justin! Its always great to trade with you! Oh... As an endnote... I have posted my 2011 Topps BLACK parallel of Blake DeWitt far too many times and have had ZERO trade offers. Justin's World has offered to take it off my hands. I REALLY don't want to post this card again. Is someone out there willing to trade me for it? OR should I just give the darn card to Justin? Whaddya think??? 5 foot seven inch people RULE!!! Go Rays! Troll out.
Posted by Collective Troll at 12:29 AM