The 5th post in this ongoing series of on-card autographs from all the members of the 2008 AL Pennant winning Tampa Bay Rays is of right handed pitcher Edwin Jackson. 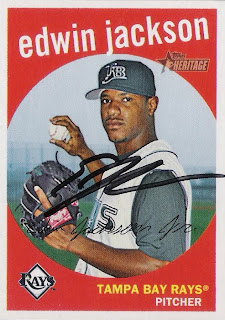 The card is a 2008 Topps Heritage which he signed after a game in 2008 for my wife. Edwin is a super ball park signer and really good TTM as well. I think by now everyone has heard of EJ's triumphant return to Tampa Bay. He no-hit his former team and blanked the guy he was traded for-Matt Joyce who was 0-4. I wanted to say congrats to EJ on an amazing performance. 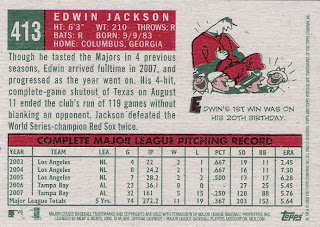 I couldn't ask for my team to be no-hit by a better dude. Go Rays! Troll out.
Posted by Collective Troll at 1:15 PM