One More For the CC PC

When I first got back into collecting in 2007 I bought exclusively Heritage. One day the shop was out and I bought a box of '07 Topps. That yielded my first ever Carl Crawford card. It was just a plain old base card, but I put it in a screw down holder anyway. I wasn't buying singles at the time and the CC Heritage card was an SP that I hadn't pulled yet. Anyway, it is a really cool shot of him sliding and it has become one of those cards that I can't get enough of. 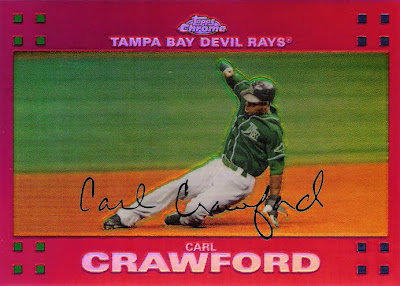 Here is another piece to my Carl Crawford 2007 Topps Rainbow Collection. A Topps Chrome RED Refractor, numbered to 99. I have never pulled a refractor of my favorite team from a pack and the 2008 Hunter Pence black Heritage refractor I yanked two years ago still stands as the only limited refractor I have ever pulled. I really don't care if I ever pull one honestly. This is a new favorite card of mine and it shipped to me for the same price as a hobby pack of 2010 Heritage. Awesome. I have seen it as a BIN in the 10 and 20 dollar range, but I only bid on actual auctions and I got a STEAL (ha!) on this one. Incidentally the Perfect Storm is having a pretty year so far. 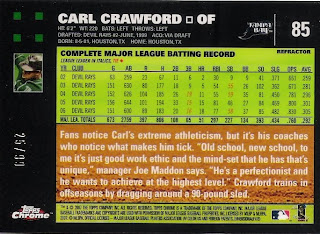 He is a three time All Star, won the games MVP last year and it looks like he has a shot to start this year. I haven't even cast my 20 votes yet! I think this card will be this weeks blog header, I REALLY like it... By the way... I am ripping and scanning cards for a Pack to be Named Later and I have a question. I have two unopend rack packs. This one of '87 Topps and an '89 Fleer. I hate to rip something I have kept sealed for so long. Does anyone want them to save?

I will trade either one for any single card from my wantlists or for a 2007 Carl Crawford Platinum... Go Rays! Troll out.
Posted by Collective Troll at 12:59 PM