It’s Sunday and I am enjoying my first day off so far this month. My wife is out with her best friend. One of my friends called and asked if I wanted his Rays tickets for today, but wifey has the car so I am “organizing” my cards. This means there are thousands of cards all over the floor. I have about 12 posts half written or partially scanned for 4 different blogs. 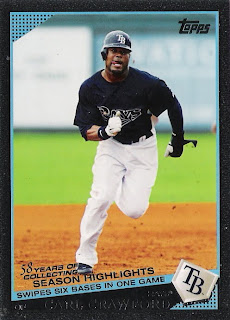 I haven’t posted anything all day, so here is a quick one-card post. It’s a favorite card of mine, so it’s okay. It comes from 2009 Topps Updates and Highlights and the highlight is the game that Carl Crawford had on May 3, 2009. I was glued to my TV set for every single pitch of that one. James Shields earned his third win of the season beating Brad Penny. Carl Crawford was on base 5 times in 5 plate appearances going 4 for 4 with a walk. He drove in a run and scored 2 more and oh yeah, he also stole 6 bases!!! That is a record folks. Actually it tied a record. Otis Nixon and Eric Young Sr. did it. Hall of Famer Eddie Collins did it too. Collins actually did it twice, in the same season, actually in the same month - September of 1912. The official record is 7 steals in one game. Hall of Famer Sliding’ Billy Hamilton did it 1894. He also batted .404 that year and stole 98 bases. Six is considered the modern record however. 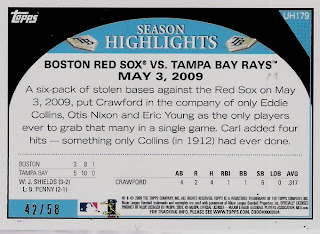 The back of the card points out that Crawford and Eddie Collins were the only 2 to steal six while having 4 hits in the game as well. Crawford’s six steals gave him 17 for the season. Jacoby Ellsbury, who would lead the AL in steals in 2009, was thrown out in his lone stolen base attempt. All of Crawford’s steals came against Sox Captain Jason Varitek. The card is #UH179 in the set. I don’t know for sure, but I really hope the picture on the front is from that game. Being under that assumption, this is one of my favorite cards. This now the third version I own of it. The regular base, the gold #ed to 2009 and now the BLACK version. Mine is numbered 42/58. I bought this card for myself as an early Father’s Day gift. I have “black Crawford Topps” as a “saved search” on an auction site, but seldom get an alert. When I saw this one for auction, I HAD to have it. Now if I could just find the platinum version I could finally complete a Crawford Quadrifecta. Thanks for reading! Go Rays! Troll out.
Posted by Collective Troll at 4:23 PM