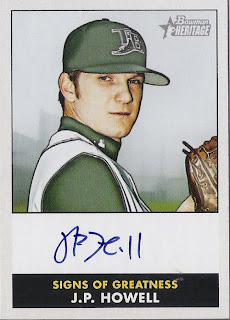 Part 7 in this ongoing series shows Rays reliever JP Howell on a 2007 Bowman Heritage Signs of Greatness card. As I continue to gather certified autographs of my favorite team I am beginning to build favorite sets. 2009 Goodwin Champions and 2007 Bowman Heritage are definitely among my favorites. Good art, simple design, clear on card autos, awesomeness! JP Howell has been an integral part of the Rays bullpen the past two seasons. This year he started the year on the DL with soreness in his throwing arm. It turned out to be worse than anticipated and he had season ending surgery in May. Dr. James Andrews performed the procedure and JP is expected to be back and better than ever for 2011. JP came to the Rays from the Royals who chose him in the first round of the 2004 draft. The Rays sent Joey Gathright and Fernando Cortez. That was another of the wise trades that led the Rays to the postseason in 2008. Things were not good for Howell in his first 2 seasons in Tampa Bay. In 2006 and '07 he was 2-9 with an ERA over 7, but he came into his own in 2008. He was 6-1 with a 2.22 in 61 games striking out 92 in 89 innings while serving as a setup man for Troy Percival and Dan Wheeler. 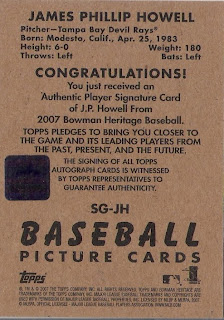 In 2009 Howell was forced into the role of closer and was not really ready for that position. His record was still respectable going 7-5 with 17 saves and an ERA of 2.84. He also struck out 79 batters in just 66 innings. Like most fans I am so used to seeing a closer come out of the pen throwing heat that seeing Howell in there in the 9th tossing the ball 78 MPH was a bit weird. I have heard he can reach 90 MPH with his sinker, but I have never seen it. He has a cutter, a curve, knuckle curve and change and they all stay between 75-85 MPH, but his movement and location keep batters swinging and missing. I look forward to seeing Howell back on the field, in the pen and on the mound in 2011. Go Rays! Troll out.
Posted by Collective Troll at 2:17 PM