David Price was the first player selected in the 2007 Draft. He began the 2008 season in A ball, but jumped to AA, AAA and was called up to Tampa Bay in September. He had a combined mark of 13-5 and earned himself a spot on the postseason roster. He pitched out of the bullpen and finished 5 games in the playoffs showing poise, composure and overpowering stuff. He seemed to be a lock for Rookie of the Year in 2009, but didn't match the hype early on. 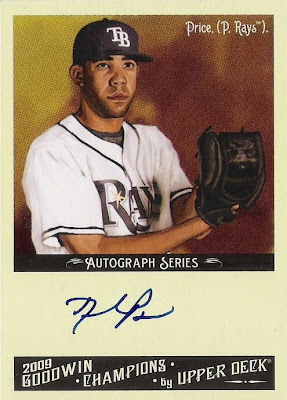 He finished with a respectable record of 10-7 in 23 starts, but his 4.42 ERA was too high to garner ROY attention. He was nearly unstoppable at home last year, but didn't earn his first road win till late in the season. After failing to win ROY many wrote him off as a prospect. He is still only 24 years old and in 15 starts so far this year he is 11-3 with a 2.44 ERA, 1 shutout and 84 Ks in 91 innings. The day after the D-Backs no-hit the Rays Price took the hill to stop the bleeding. He responded by striking out 11 D-Backs and garnering his 11th win. The Baseball Bloggers Alliance (of which I am a proud member) voted Price as the American League's starting pitcher for their All Star Team and one can imagine that Joe Girardi SHOULD chose Price as the AL's starter as well. The card is a 2009 Goodwin Champions ON-CARD auto. I think the rendering makes Price look like President Obama and the signature doesn't exactly fill the space on the card, but I am thrilled to have a D Price auto in my collection. Go Rays! troll out.
Posted by Collective Troll at 1:38 PM