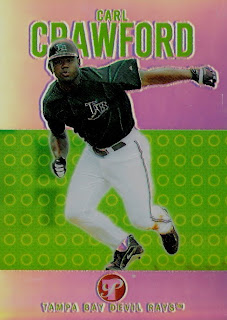 A .307 batting average, 104 runs scored, 30 doubles, 13 triples, 16 homers and a career high 87 runs batted in and 46 steals. Those are MVP numbers and his teammates agreed. The anonymous team votes for Team MVP, ROY, Cy Young and Gold Glove saw Crawford being named the Rays Most Valuable Player again. It has been a super special season for the Rays left fielder in 2010. He started his 1st All Star Game, hit his 100th career triple, 100th career homerun and stole his 400th base. All those things will pale in comparison, of course, to winning his first World’s Championship with Tampa Bay. My card buying budget has been microscopic of late, but I did manage to add a couple of new Carl Crawford cards to the PC recently. 5 cards, all serial numbered lower than 99 and all really cheap… Here we go: 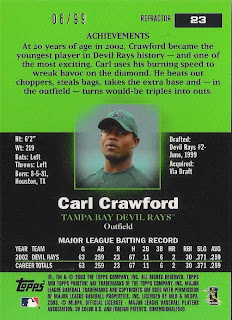 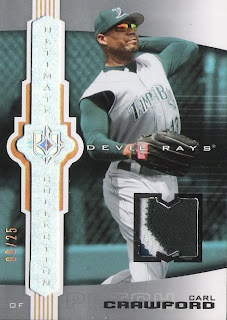 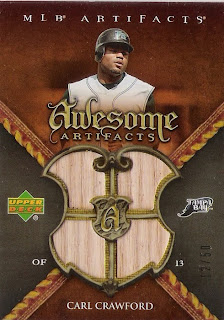 From 2007 Upper Deck MLB Artifacts, card #AW-CC, an awesome Awesome Artifacts bat relic which is numbered 12/50. I don’t know if the medieval design is awesome or too much of a stretch, but I will jump on any card I don’t own that I can pick up for a steal… 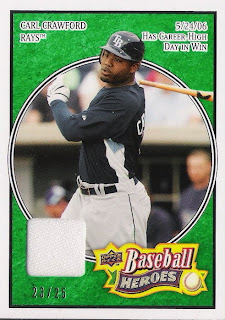 I could probably make a career of chasing all of the different UD Baseball Heroes variations. This is now my lowest numbered and first Heroes jersey relic. It is from 2008 UD BH, card #165. It is emerald green and is numbered 23/25 right beside the white jersey swatch… 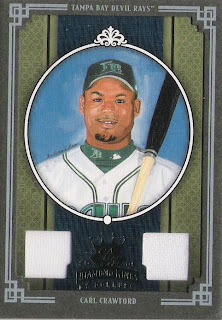 The last card of this bunch comes from 2005 Donruss Diamond Kings. It is a Crowning Moment jersey relic drawn by Mike Schroeder. 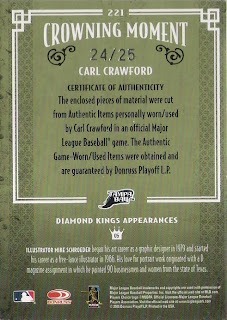 It has 2 tiny white swatches on the front and is numbered 24/25 on the back.
I have been saying I am going to organize my Carl Crawford collection for nearly a year now. It will happen someday. It has to, because I can’t afford to buy dupes and I want to keep building this one. Thanks for checking out my new additions. If you have any CC pulls that need a new home, please drop me a line… I love this hobby! Go Rays! Oh, by the way... Make David Price a happy camper and fill the seats tonight as the Rays clinch a playoff spot behind the 2010 (team) Cy Young Award winner. Troll out.
Posted by Collective Troll at 2:55 PM