The Magic Number is Still 2...

Well I didn't get to see James Shields pitch a perfect game to clinch a playoff berth... That became evident quickly when he allowed a leadoff single to Ichiro. I also didn't see Carl Crawford hit for the cycle. I didn't even see him play. Joe Maddon gave a number of regulars the day off including Crawford, Longoria, Ben Zobrist and John Jaso. It was actually pretty cool seeing Rocco Baldeli and Desmond Jennings get the start. 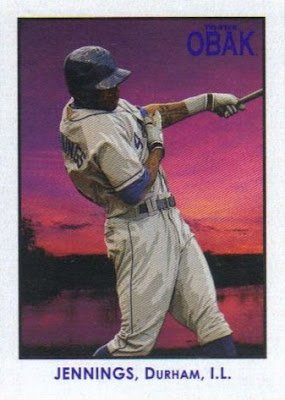 Zobrist and Jaso entered the game as pinch hitters, but the most exciting thing of the day for me was seeing Desmond Jennings hit his first big league triple. That dude can fly!!! I am terrified that this will be Carl Crawford's last year in Tampa Bay. He has been my favorite player for many years now and I don't want to think about the Rays without him. That said, I REALLY want to see Desmond Jennings on the opening day roster somewhere in 2011. Congrats on the first of many triples Desmond! By the way, I do not own this Obak Jennings card, but I would like to! Go Rays! troll out.
Posted by Collective Troll at 8:40 PM