The Joy of a Completed Page - Yo Mama Edition...

So I getting more and more organized every day. Making lists and checking them several times. I am also getting back into the trading game and I am in the process of hammering out a trade with a Mets fan and blogger, the famous blogger who runs B.A. Bennys Baseball Card Buffett. As it turns out he is chasing 2010 Topps inserts, too. HIS needs list is RIGHT HERE. Speaking of needs lists... BA Benny knocked cards off of nearly all of my lists including 2009 Topps Updates which has been collecting dust for far too long... I would REALLY like to finish this one off before 2010 U and H hits the shelves. Speaking of sets that I will probably NEVER finish - BA Benny is sending me 13 cards from 2010 Topps Heritage. That list is updated as well. I hope to get a little closer to finishing that one BEFORE Heritage high numbers come out. 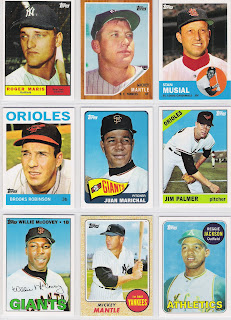 Anyway, this post was intended to be about the Joy of a Completed Page. While organizing cards I did in fact finish a page. CYMTO10 through CYMTO 18, beginning with 1961 Roger Maris up to the 1969 rookie of Mr. October. Apparantly your mom threw out Mickey Mantle cards quite often. He appears twice out of these 9 cards and he showed up on the previous completed page, too. So out of 9 cards you have 7 Hall of Famers with Mantle appearing twice and Roger Maris being the lone player locked out of Cooperstown. Thanks for looking and sharing my Joy and scoping out my wantlists and BA Bennys too. Next up is a wantlist for 2008 Allen and Ginter, so stay tuned... Go Rays! troll out.
Posted by Collective Troll at 1:30 PM