The Oldest BASEBALL Card I Own AKA A New Purchase AKA The Cornerstone of my Collection... 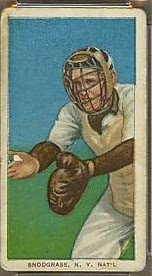 I think there was a Blogger Bat Around question asking about the cornerstone of your collection. That was probably a year ago, but here is a special card and a cool story around 12 months late…

A lot of bloggers have written about the oldest cards in their collection. My oldest cards are 1887 Allen and Ginters, but unfortunately I don’t own any baseball players from that set. To get to my oldest baseball cards you have to fast forward to the 1909-11 T 206 tobacco cards. I own a few and covet many. I like cards that tell a story and sometimes after reading a great story I seek out a card to go with it. My cornerstone card is a T206 of Fred Snodgrass. It features the young player in full catchers gear and has the Sweet Caporal back. Here is why this card rocks to me... 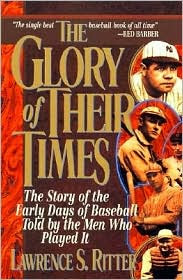 I remember as a teenager reading the awesome book by Lawrence Ritter called “The Glory of Their Times”, a book where Ritter interviewed 26 of the oldest living veterans of the game and one of them was Fred “Snow” Snodgrass. 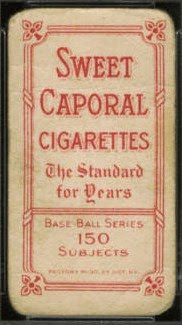 Snow spent 9 seasons in the Big Leagues, mainly as an outfielder with the New York Giants. One of my favorite things about this card is the photo of Snodgrass in full catchers gear. A lot of bloggers collect these type of cards and I admit and I am getting more fascinated with these photos. The ironic thing in this case is that Snodgrass only played 6 games behind the plate in his entire career. All 6 came as a 20 year old rookie backing up Chief Meyers for the Giants in 1908. The next season he shed the gear and moved to the outfield and by 1910 Snodgrass became a regular in the lineup and hit a career high .321. That placed him 4th in the National League above Hall of Famers like Honus Wagner and Zack Wheat and NL MVP Frank Schulte. He also hit 8 triples, drove in 44 and stole 33 bases. 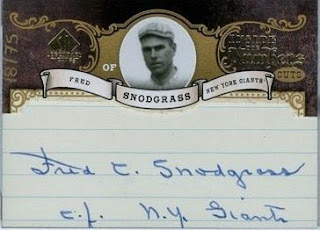 From 1911-1913, Snodgrass played in three consecutive Fall Classics with the Giants, but was on the losing end each time. In his second, the 1912 World Series against the Boston Red Sox Snodgrass committed one of the most famous errors in baseball history. In the 10th inning of the deciding game, Snodgrass, who was one of the league’s best outfielders, dropped a routine fly ball that put the tying run on second base. He proceeded to make a spectacular game-saving catch on the next play, but the Sox went on to score two runs in the inning to win the World Series. 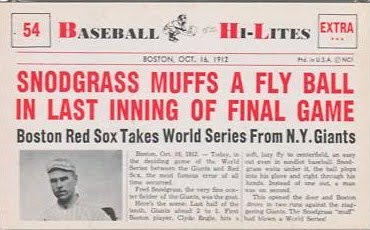 In the early 1960s, a half-century after his infamous dropped ball, Snodgrass recounted the error in an interview with author Lawrence Ritter. The interview was included in Ritter's renowned baseball book “The Glory of Their Times”, which featured oral accounts by 26 of the game's oldest surviving players. This is a highly recommended book. I love the compilation style recounting books. “When The Cheering Stops” is another great one. There were 26 subjects in “The Glory of Their Times”, including players like Hank Greenberg, Sam Crawford, Goose Goslin, Edd Roush, Sad Sam Jones, Chief Meyers, Lefty O’Doul, Hans Lobert, Harry Hooper and Paul Waner. 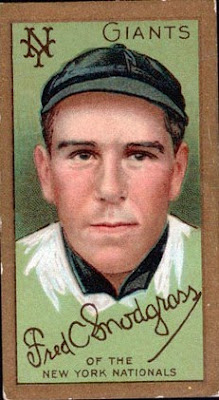 Albeit a small one, this card allowed me to put a face to the story I had read from Snodgrass. I hope to add some of the other featured players to my collection soon. Every player has a story and their cards serve as the spark to remember or to tell it.
After his playing career had ended he became a successful business man and politician and spent time as the Mayor of Oxnard, California. In the 1940s he was quoted as saying: "(There is) hardly a day in my life, hardly an hour, that in some manner or other the dropping of that fly doesn't come up, even after 30 years."
Even in death it was his famous error that was remembered. When he died on April 5, 1974, his obituary in the New York Times was headlined "Fred Snodgrass, 86, Dead; Ball Player Muffed 1912 Fly."
In this game that we love it is the goat, not the hero that we remember. When you think of the 1986 World Series do you think of Ray Knight or Bill Buckner?
I am delighted to add a card of a great outfielder from the Golden Age of the game I love to my collection. Thanks for reading my story. Fred Snodgrass has a number of other cards available. 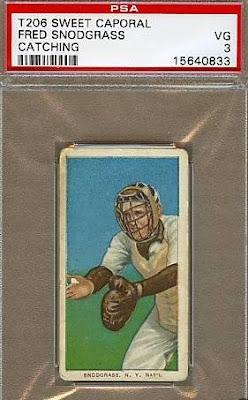 The 1911 T205 for one, but none of them seem to compare to the T206 depicting Snodgrass as a young catcher long before the infamous muff… By the by... This card set me back the same as a blaster of 2010 Topps T206 would have. This card makes me far happier. The only thing I don't like is that the card is trapped in a PSA case and I really want to hold it! Also, the images OTHER than the T206 are all borrowed... Someday I hope to own all things Snodgrass cuz Troll's love Goats! Plus, Snodgrass... Oh and one of the labels for this post is "famous muff". That oughta bring the hits!
I love this game, I LOVE this hobby!!! Troll out.
Posted by Collective Troll at 9:33 AM