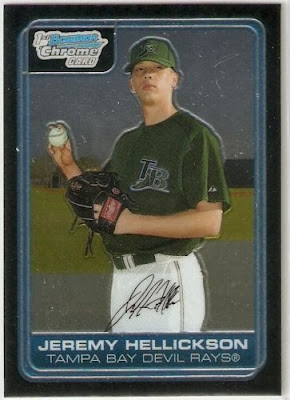 The 2011 American League Rookie of the Year!!! He becomes the 2nd Rays player to win the honor after going 13-10 with a 2.95 ERA and helping Tampa Bay to win the AL Wild Card... A World Series ring would have been nicer, but I am feeling pretty proud as a Rays fan right now! Congrats again to Jeremy Hellickson!!! If you have any unwanted cards of JH, feel free to send them my way! Go Rays! troll out.
Posted by Collective Troll at 12:55 AM No comments:

Is Anyone Else Working on 2011 Topps Updates???

Creating a Monster OR Taking the Plunge and Building an Allen and Ginter Minis FRANKENSET!!!

So after years of hoarding every single mini I could get my mitts on I decided to take action and get them organized. I sorted through thousands and thousands of cards and yanked out all the minis I could find. I sorted them into boxes and now have sorted them out of their boxes and move them into a binder, in other words I decided to begin the task of building a monster that we call a FRANKENSET!

Before I began the process of bindering my random minis I counted them. I had just fewer than 400 minis. Cool. I figured with just 350 cards in the set I would be well on my way. I was wrong. I didn’t consider that I had 5 different cards numbered 13, 57, 67 and 91. Turns out there are more than 120 card numbers that I don’t have. So… I have devised a list of all the card numbers that I need. The goal will be to get at least 1 card for each number and then I begin the process of finding the best possible card or player to rep each number. 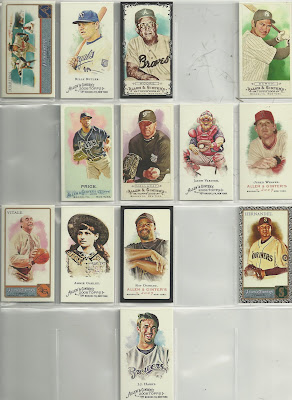 To help me along on this mission I have decided that I will be willing to part with some of the minis that I have hoarded and hidden over the years… Anyway, these are the card numbers that I need. Any year, any back, any border – I do not discriminate… Send me these card numbers please:

So to save you the tediousness of counting, there are 126 (give or take a few) cards listed above. The goal is to have every slot filled and THEN I can start the process of upgrading and have a PERFECT set of all of my favorite players and historical figures.

This is, of course, easier said than done… Anyone who has attempted this process knows this. Choosing which card gets the spot in the set ain’t easy. Sometimes it’s easier than others – like card #27 which is occupied by Brad Hawpe both in 2008 and 2010. Other numbers are much harder. Card #13 pits BJ Upton vs. Eleanor Roosevelt vs. Brett Anderson. Card #50 is home to Pat Neshek, Carl Crawford, Jason Bay and Albert Pujols. In each of those number cases I have ALL of those cards. Decisions, decisions… Set into the binder this Frankenset, so far, looks bizarre… Players like Ryan Freel, Matt Murton and Austin Kearns all have (temporary) spots in the binder while fav players of mine like Pat Neshek, Justin and BJ Upton, Carlos Pena, Delmon Young and Carl Crawford are all in the dupes for trade pile. Go Figure. It is a bizarro world when Austin Kearns is a keeper and either Upton Brother is tossed aside…

Anyway, I now have 100 minis up for trade, SPs, black borders, Ginter Ad Backs, stars, rookies and all. Just keep in mind I want specifically to trade minis for minis. I would be willing to trade these minis to fill holes in my Kimball Champions set, too. OR to trade for Rays Bazooka back minis OR Rays silks, relics, printing plates, autos, black borders, extended minis, etc. It isn’t easy for me to part with any mini period, so please be sure to only make serious offers and be gentle…

If you have spare copies of any of the card numbers listed above, please get in touch… In addition to my 100 Ginter minis I do have some cards that I would be willing to trade for any of these card numbers. I do prefer authors, historical figures, boxers, Rays, managers, Negro Leaguers, women, softball players or HOFers whenever possible.

I have 5 different pages with 20 cards each in them which I will be posting for trade bait... In most cases I want to trade mini for mini, SP mini for SP mini. There are a couple of fancy/rarer cards here, like a 2010 Jacoby Ellsbury NO# mini (limited to 50) and some 2007 Black Border No # minis, which are also limited to 50. Basically, if you have minis that I need, I WILL find you something awesome to trade ya…

Oh yeah, I’m almost back… I will try and post at least once per week over the next 2 weeks, but after that, it might be a daily thing, so stay tuned!

Also, ALL of my wantlists are up to date. A handful of generous folks have kept the trading pipeline pumping. Aside from the vintage (1963 and ’65) which are tops on my priority list, I am trying REALLY hard to finish off 2010 and 2011 Allen and Ginter, 2009-2011 Topps, the Kimball Champions minis set (1-150) from 2011 and I wanna start collecting 2006 Allen and Ginter. I would love to find a hobby box to rip, that would be AWESOME!

Anyway, I love this hobby, I really miss this… I scanned one of my pages, the one that is the closest to being full. I stopped using the 15-up Ultra Pro pages (for this set at least) and have begun using 20 pocket BCW pages. So far I am pretty happy with them.

Thanks for reading! Go Rays!!! Burn bright hot stove! I love this game, I love this hobby! Troll out.

(oh, BTW… I am posting this NOW, BUT I didn’t get the trade bait pages up yet. So, for now, search your dupes and see if you have anything I need… Within the next couple days I WILL post 5 pages filled with awesome minis that are up for grabs… SO – stay tuned Trollites!)

(and PPS... I have barely been online over the past month... If you have emailed me, offered me a trade, if I owe you a trade or owe you money, you should probably hit me up again... Send me an email HERE... Cheers!)