So, after my last post of my super rad 1/1 Albert Pujols cards which will hopefully bring in enough dinero to get a hobby box or 2 of 2011 Heritage several of you e-mailed me asking if I had a want list for 2011 Topps. Well, I have exactly 100 cards so far. This means that I still need 230 to finish off ye olde set. I did put together a list, finished it just a few minutes ago actually. My 100 cards are now in a binder along with the 5 minis I have, plus all of my dupes and the various inserts that I will NOT be collecting. You can click RIGHT HERE to see what I got... Thanks so much for checking out my list. Hopefully I have something that someone needs... By the way, I am WAY over tired and I think this entire post links to my wants/trade list... 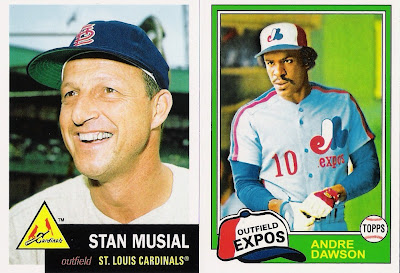 troll out.
Posted by Collective Troll at 3:24 AM 1 comment: 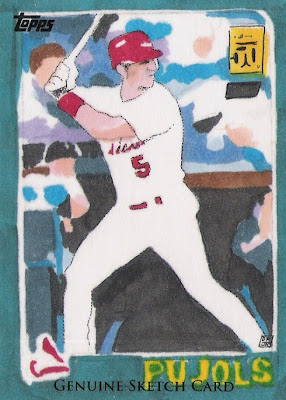 Okay, the 1 of 1 autographed sketch card is now in the Casa de Troll. It was drawn by renowned artist Don Pedicini Jr. and is in the style of Albert Pujols 2001 Topps rookie card. The back of the card is marked 1 of 1 and bears an on-card auto on the back from the artist, Don Pedicini Jr. Like I said before I THINK this is a 1 in 20,000 hobby only hit. I believe there are 60 different 1/1 sketch cards in this series and at least 2 different featuring Albert Pujols. If anyone has any insight on this one, please comment here. I will be listing it as a 7-day auction on eBay with bidding starting at 99 cents. If anyone really wants this, let me know and send me an offer before I list it… 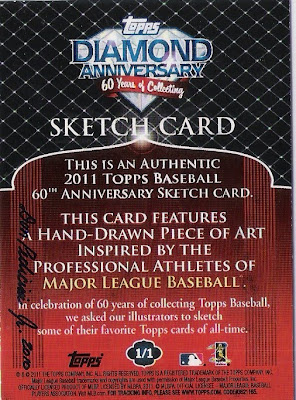 Thanks so much for checking this out. Bacon is back on the hobby horse! Troll out.
Posted by Collective Troll at 2:58 PM 7 comments:

So my LCS bought a case of 2011 Topps hobby. The owner said if he sold half of it he would let me rip a box for fun in the shop. Well I ripped the box today. No hits in the first 20 packs. Pulled 2 boring relics in the next 3 packs and then I pulled a 1/20,000 1/1 autographed sketch card. My math is fuzzy, but that is a hobby case hit or better. I think it was the "guaranteed box auto" because I didn't pull another. I didn't even realize it was a 1/1 at first. Basically while I was complaining about no auto in the box I started looking at card backs and noticed. He wanted to show the card off to a couple of potential buyers, but I get to bring it home tomorrow. I will post it then and it will probably fly off to eBay from there. I wanted to post a teaser just in case anyone knew anything about these autographed sketch cards. The odds I listed I got from an eBay description - I don't really know anything about these cards... Cheers! Baseball season is coming!!! troll out.
Posted by Collective Troll at 2:06 PM 2 comments:

Have you ever got a package in the mail, opened it up, did the happy dance because you got some awesome stuff, sent the thank you email AND THEN a year later discovered there was something super awesome that you didn't notice when you opened it originally??? I did. Around a year ago I got a BIG box from Adam E of Thoughts and Sox fame. He sent me about 50 padded envelopes, which are like gold to traders. There were some sweet cards in there, too. Well... Those envelopes lasted me a really long time. I have been a bad trader and very inactive in that capacity. Well yesterday I started getting a few packages ready to go to the post office when I get the cash and I grabbed the LAST envelope from the box and discovered 2 cards in top loaders... Holy shizzit! Two AMAZING cards! Two SWEET VINTAGE cards of my favorite player of All Time, one of the greatest players to ever play the game, the legendary ROBERTO CLEMENTE! I can't believe that Adam sent me these (THANKS SOOOO MUCH!!!!) and I can't believe that all this time I had these two incredible cards in my collection and I didn't even know it! Well, without any further adieu here they are... Starting with what is now the oldest Roberto Clemente card in my collection. 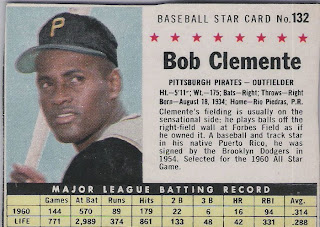 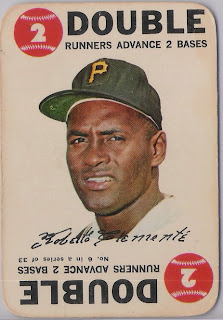 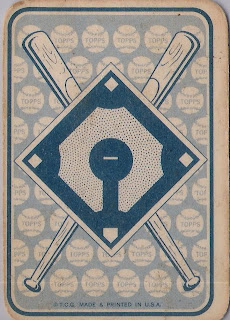 Awesome. What a great surprise! It's things like this that get me really excited about collecting again. Thanks so much Adam! For everything! troll out.
Posted by Collective Troll at 2:39 PM 8 comments: