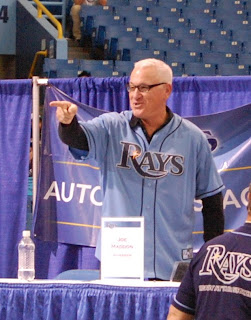 Thanks to everyone who entered the quick Chipper Contest. It is now closed; I will randomize a list sometime next week. A sorry to those of you who didn’t make it, your time will come! Today was supposed to be the last day of full-squad workouts at Pirate City, BUT it has been raining all day. I pick lil bro up at 9 AM and we came back to my house to wait it out. Let me just say that playing ping pong in my garage is a lot of fun some days, but not when you plan on watching baseball out in the sun.
I just dropped “Dan” back off at home and now I am supposed to be cleaning the house to prepare for my niece to come over. I figured I would probably have time to write a quick post though… This is a 5 From 5, Rays Autographs Edition. I have received quite a few Rays graphs lately, but these are close to the keyboard, so I will go with them.
The first is of the Rays fearless leader, our manager Joe Maddon, shown here on his 2009 Topps base card, belly and all. This is rad for a few reasons. One is that (as far as I know) there aren’t any certified manager autos out there. 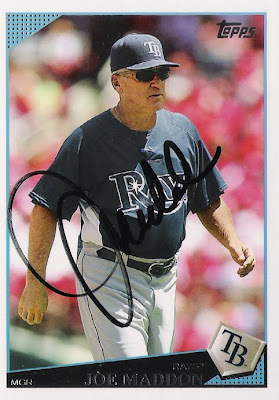 I know there are scout autos, but I haven’t seen managers and I wondered how I would add Maddon to the collection. This one came to me from (the other reason it is rad) my wife, the lovely and legendary Esther Gin N Juice who waited in line at Fan Fest for this one. 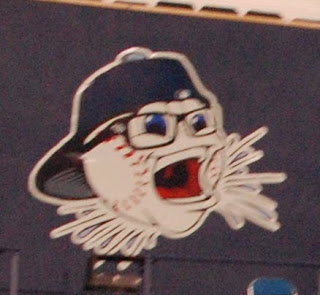 The security guards at the Fan Fest were living out their Cop Fantasies and EVERYONE out of line was complaining about them. “One item per person, no pictures, don’t talk to the players” they said, it was stupid. I didn’t wait in line, but my lovely wife did and she proved my theory that pretty girls get special privileges with this. Normally that would irritate me, but having a 9=8 Maddon ball on the mantle looks pretty good. 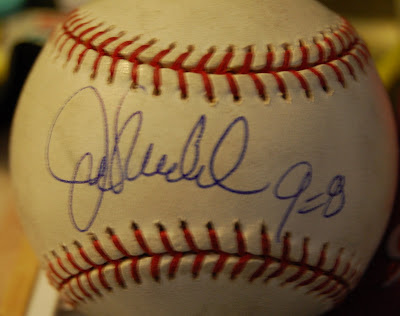 The next one comes from reader Derek L and shows the Rays new closer as a rookie with the Mariners from 2002 Donruss Rookie Crusade. 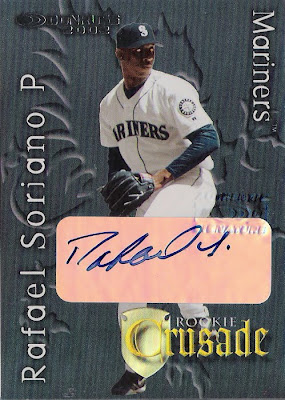 This is obviously before Donruss lost their licensing and it is a sharp and shiny card with a shinier sticker on it. You can see the evolution of Soriano’s signature here on this one from EGnJ’s (again) Fan Fest adventure. 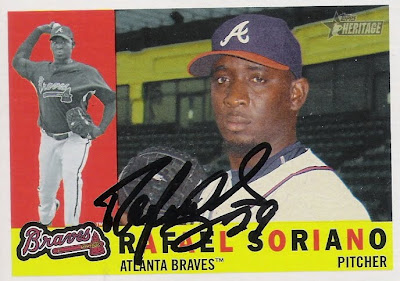 The next Rays auto comes from Joe L. of the Cobb and Halladay blog. Joe has hooked me up with several Rays graphs and has a knack for finding ones that I need. This one is from 2007 Upper Deck Spectrum and shows Juan Salas. 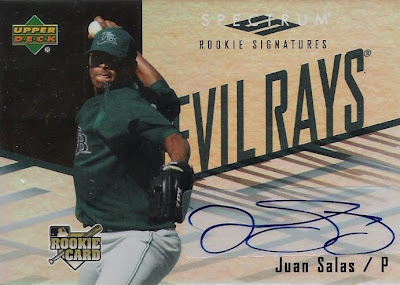 It is a sticker auto, too, but Upper Deck used the more sublime scotch tape sticker on this one. Salas spent 10 years in the Rays organization, originally as a third baseman, then converting to a hard throwing pitcher. He made appearances as a reliever with the big club in 2006-2008 before being traded and released from Cleveland. The 4th auto comes from another super trader who seems to hook me up on a weekly basis, Mr. Alfredo Ortega from My Past Time…I Love It!. He sent 4 other autos in this batch, but for now I will show this one as it came from my “most wanted” list. I think this is a redemption auto as it is in a screw-down case with a Bowman sticker sealing it. The card is 2005 Bowman Draft Pick card showing the Rays #1 pick from the 2002 draft, BJ Upton. 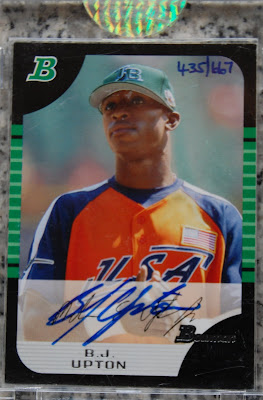 This card is signed on-card in blue sharpie and is numbered quite randomly 435 of 667. The fifth card is in a similar case with the 2006 Bowman Originals sticker on it. It comes from another reader, Gary N. The card is a 2005 Bowman of Scott Kazmir and it is signed in blue sharpie (very fine tip sharpie) on-card. 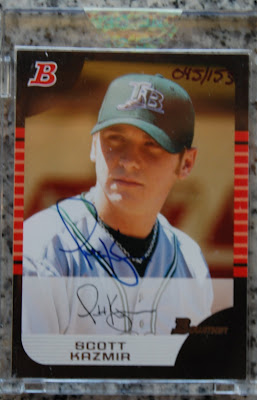 It is also randomly numbered 045/155. Thanks to everyone for this great autographs! The most wanted list now includes Carlos Pena, Dioner Navarro, Willy Aybar, Gabe Gross, Matt Garza, JP Howell and Cliff Floyd. THEN, I will have EVERYONE on the 2008 American League Championship team! Next I will start working on the 2010 Championship team, cuz it is gonna happen! Thanks to everyone who hooked it up with these awesome cards! More autos and more awesomeness to come… Oh, if anyone knows anything about these 2005 Bowman autos with the 2006 Bowman Originals stickers on the case, let me know... Go Rays! Troll out.
Posted by Collective Troll at 1:51 PM