Unless it is at an event specifically for fans to get autographs (like a fan fest) I will never ask a player for an autograph in person. As a journalist, it complicates things and it is not a good idea. I shouldn’t say never though. In the past I have made exceptions for Cal Ripken Jr., Bob Feller, Bert Blyleven, Dave Winfield, Tom Seaver, Steve Carlton, Duke Snider and Bill Mazeroski. I have never made an exception for a current player however. 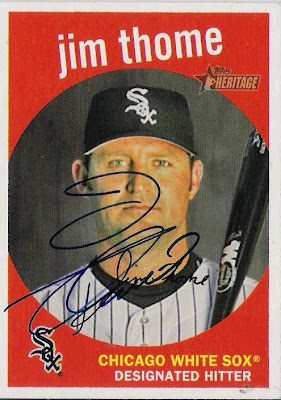 Until this spring when I bent my rules for a left handed hitting slugger who recently signed with the Minnesota Twins. He hit 23 homers last season and he will be turning 39 this summer. In the Twins lineup he will have good protection and should see a lot of pitches to hit. He is only 46 homers away from becoming the 7th player to reach the 600 homer club. He is 9 homers away from reaching the top ten of All Time. He is currently 12th All Time and 3rd among active players. He thinks he can still be a productive hitter in the big leagues. I believe him. I am speaking of Jim Thome, of course. He is a 5 time All Star and his .557 slugging percentage puts him 23rd All Time in that category. His 1619 walks are tops among active players and 10th All Time. His 564 homers is 5th best among left handed batters behind Aaron, Ruth, Griffey and just 5 homers behind Rafael Palmeiro. 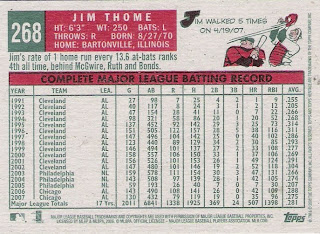 In my opinion he is a first ballot Hall of Famer. Even in the livest of live ball eras, he is among the most intimidating sluggers in the game and has been for nearly 20 years. That is why I bent my rule. That and I just happened to have this 2008 Topps Heritage card handy… This card might be available for trade, or maybe for a contest prize or maybe I will treasure it forever. Any opinions? Go Rays! Troll out.
Posted by Collective Troll at 7:16 AM