Getting In on All of the PHUN!!! 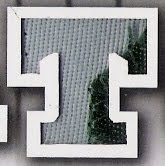 It has been close to a year since I have been trading with other bloggers. There are a few of you that I haven’t traded with yet, but the list is getting smaller. I was able to pull off a deal with the legendary Phungo Blog and it was all that I had hoped for and then some. I did receive one of the magical “2009/2010 Phungo Cards Combo Packs”. I have seen these posted on other blogs and have really wanted to rip one myself for a while now. The ripping will have to wait for later. The house have cards ALL OVER THE PLACE and my sister Dawn, her husband Jonathan and my niece Ruby are coming to visit from London, England tomorrow. Ruby is a crawling machine and like all babies, she puts everything she can get her baby hands on into her mouth. I would hate to have to kill my adorable niece the first time I meet her, so I am running around the house and stuffing everything into boxes today. Anyway, I won’t open my Phungo Pack, but I will show off some other cards he sent. This one came from 2008 Topps Stadium Club. 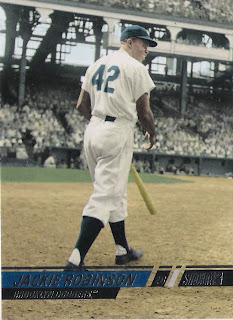 These were sold in blasters and a few months ago all of the discount department stores that carried them marked them down 50%. I never bought any blasters because I already had Clemente, Roberts, Crawford and Niemann-all scored in trades, so I didn’t see the point. I didn’t realize that Jackie Robinson was even in the set, but now I don’t have to worry about finding it cuz Phungo sent it to me! 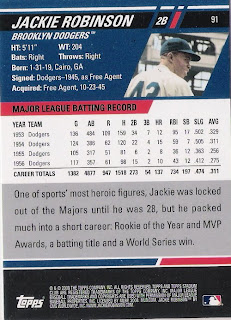 He also hooked up a big stack of random Rays. Some were of the retro variety which I love. There were Fleer Traditions (even though I think this design is weak) 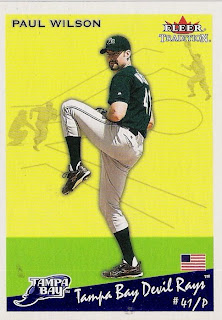 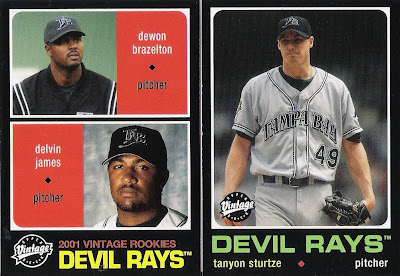 I never understood why (or how) Upper Deck was using old Topps designs for their cards, these 2001 UD Vintage are styled after 1971 Topps, or wait, is it 1971 O-Pee-Chee? Did they get those designs when they bought the OPC name? 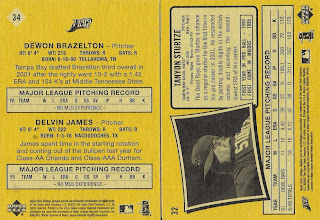 Anyway, I like the look of these a lot. I had started getting my sets in order, making all kinds of lists and what not, but everything is a mess once again. I need to take a couple days off and just hang out with my cards. Wouldn’t that be nice? 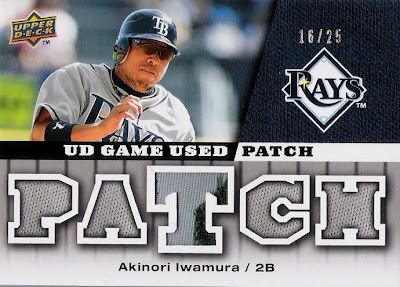 Anyway, the Keystone of the trade is coming up. Its one of those cards that seems larger than life and a scan doesn’t capture it. It is from 2009 Upper Deck series 1 and it’s a serial numbered game used patch of current Pirates second baseman Akinori Iwamura. This one stands out as super special to me for a few reasons. The first Rays relic I owned came to me last June (seriously, no relics before that, I had like 35 Rays cards when I started blogging) from my friend Duane at Democratic Roadkill. It was the game used jersey version of this card and it will always be super special to me. 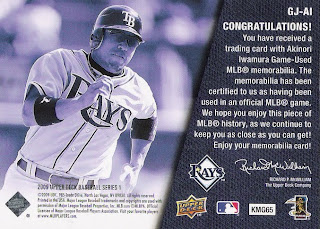 It really blew my mind that there was a chance that a piece of fabric on that card might have been used by Aki in a game-it further blew my mind that someone out there was willing to share it with me. Anyway, this patch compliments that card nicely. The patch itself is two colors and has threads hanging off of it. It is about 3/16” thick and just jumps right out at you. It is an amazing looking slab of cardboard. At 16/25 it is the lowest numbered Aki card in my collection, too. I haven’t spoke with him (don’t think I could) but I saw him this morning in Pirate City and he is having fun and looks happy with his new teammates. I don’t think he will stay a Pirate for too long, but I think he will do well while he is there and YES I do still intend on collecting all of his cards that I can… Oh, there is another reason why this patch card stands out in the collection. I also lucked out and got the Carl Crawford version of this card, too. I need to track down the BJ Upton patch and the CC jersey from 2009 Upper Deck and then I will have all of the Rays covered in patch and jersey, woo hoo! I love being an obsessive completist! 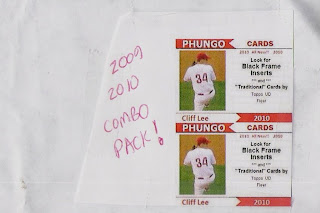 Thanks so much for the awesome trade Phungo! It was great wheeling and dealing with you and I am VERY happy with my take and I still haven't my pack of Phungo Cards yet... I really hope that our favorite teams can have a rematch this October that would be awesome! Stay tuned for the Phungo Cards pack rip, stay tuned for about 180 pack rips, some more spring training coverage and a whole bunch of trade posts!!!
On a totally unrelated topic, I have received packages of 2010 Topps this week from Dog Faced Gremlin, Roll out the Barrel, Cardboard Junkie and Cards on Cards, THANKS SO MUCH TO ALL OF YOU!!! As soon as I can get to a scanner I will post a completed page that you all helped on. Team work, gotta love it!!! You can view my progress here; I am only 6 cards away from sticking a fork into the series 1 base set, but I am still planning on chasing all of the inserts, too. The pesky cards I am still searching for are: 78,127,131,213,235 and 289. I have yet to get my mitts on any black variations, but I want to get all of the Rays, plus all of them in gold, too. 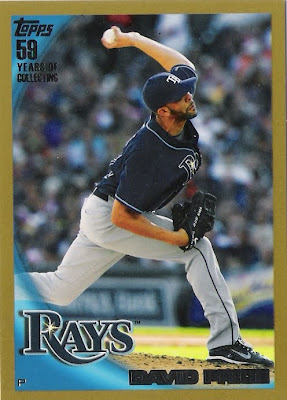 I don’t have one so far, card #225 of David Price in gold, this one came from my buddy Ed from Roll Out The Barrel, THANKS ED! I hope to post more of the great stuff you sent soon… I don't think I have any doubles of the base set cards either... Basically if the gigantic team logo on the front says RAYS, send it my way! Thanks again for the awesome trade Phungo! THANKS to everyone who has been keeping the workers at the Tallevast Post Office busy. Y'all rock! Gotta get back to work, Go Rays! Troll out
Posted by Collective Troll at 3:21 PM