Welcome and good morning Trollites! It is time for another card from the really big set I have been working on, the 1964 Topps Giants. This is card # 57 of Ken Boyer of the St. Louis Cardinals and it is the Collective Troll’s Card of the Day. Before I share my take, here is what the folks at Topps Chewing Gum had to say on the back of the card.
KEN DOES IT AGAIN
BOYER PLAYS IN 10TH ALL-STAR GAME
The St. Louis Cardinals third baseman, Ken Boyer, played in his 10th All Star contest in 1964. Cracking a home run and two hits in the game last July, he upped his All-Star batting average to .347 against the American League’s top pitchers. Ken began his minor league career in ’49 as a pitcher. With Lebanon in the North Atlantic Conference, he won 5 games, but batted .455! Ken gave up the mound in 1950 when he hit .342 as a part-time outfielder for Hamilton in the Pony League. Since coming up to St. Louis in 1955, Ken has topped the .300 mark for five years. In 1961, the right-handed hitter batted .329, finishing third among the National League’s top batters.

Well, Topps summed it up pretty well. Boyer started out as a pitcher in the minors, became an outfielder and eventually one of the best third basemen in the National League. I did not realize that he began as a hurler, but as a teenager in the Cards system he pitched in 192 innings compiling an 11-9 record. Of course he would fame as a third baseman and not a pitcher, but he definitely made good use of his strong arm. For a decade’s length of time it was academic that Brooks Robinson would be on the American League’s All Star squad and Ken Boyer would be his counterpart in the NL. As a member of the Cardinals he was part of their World Championship team in 1964. As it turns out, Boyer’s best season came after this card was printed-actually it came the year that it was printed. In 1964 he started his 6th All Star Game at third base (11th overall). In addition to that, in 1964 he won the Lou Gehrig Memorial Award, the Major League Player of the Year Award and was awarded the National League MVP. In ’64 he batted .295 with 24 homers and a league leading 119 runs batted in. He also scored 100 runs, had 30 doubles and 10 triples while winning the National League pennant with the Cards and eventually winning the World Championship, beating his brother Clete Boyer and his team, the New York Yankees in 7 games. The Cards rode the fine pitching performances of Bob Gibson, but also remained alive courtesy of a game 4 grand slam from Boyer. Over his career Boyer had a .287 batting average with 282 homers and 1141 RBI. He appeared in 11 All Star Games and won 5 Gold Gloves.

He had 2143 hits. He remained on the Hall of Fame ballot until 1994 after appearing on the maximum of 15 ballots. His highest level of support came in 1988 when he received 26% of the vote. After his retirement as a player, Boyer managed in the Minor Leagues for 7 seasons and also spent 2-1/2 years (1978-1980) managing his former team, the St. Louis Cardinals. Ken Boyer was a Missouri native who played in his home state with the Cards for most of his career; he was also 1 of 14 Boyer children. Two of his brothers played Major League baseball. His brother Cloyd was his teammate with the Cards in the early 50s while his other brother Clete was also a Gold Glove third baseman. 3 of his other brothers spent time playing ball in the minor leagues. Ken Boyer’s number 14 was retired by the Cards in 1984. He is the only Non-Hall of Famer to have his number retired in St. Louis. His 255 career homers in St. Louis ranks third in club history behind Stan Musial and Albert Pujols. He also ranks among the top-10 All Time among third baseman in games, assists and double plays. Boyer died of cancer at 51 years of age in 1981. The 444 homeruns that he and his brother Clete hit combined rank 4th all time among brother in the majors behind Hank and Tommy Aaron and Joe and Vince DiMaggio or Joe and Dom DiMaggio. His records as a member of the Cards and as a third baseman are vast, I could go on, but will end it here. 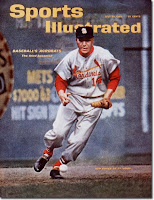 Despite the fact that the writers failed to recognize him as worthy for Cooperstown, he remains one of the great third baseman of all time, at the plate and in the field. He will never be forgotten by fans in St. Louis, either. For now he suffers the same fate as Ron Santo, a great third baseman who played in the deadball era… By the by, Boyer's hat looks seriously airbrushed to me, but at this point he had only played for the Cardinals...Maybe he just had an ugly hat? Okay, there are plenty more Card of the Day posts to come on this set and other awesome vintage sets from the 50's and 60's on this blog and it's brother blog, The Nitty Gritty. 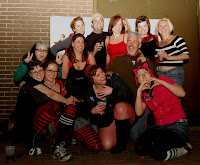 Check em out cuz the Bradentucky Bombers (and their fans) say so. Go Rays! Troll out.
Posted by Collective Troll at 9:40 AM