The Collective Troll's (GIANT) Card of the Day!

I may post these here or on the Troll’s brother blog, The Nitty Gritty, but as I receive more of these, I intend on posting each one. This one is today’s Collective Troll Card of the Day. It is card #43 of the LA Dodgers’ Tommy Davis from the 1964 Topps Giants set. For my wantlist and random obsession info on this set, click HERE. One of the many things I LOVE about these awesome oversized cards is all of the info on the back of the card. Here is what the writer’s at Topps Chewing Gum had to say:
“Tommy Tops Again.
Davis Wins Second Batting Title.
The Los Angeles Dodgers’ Tommy Davis won his second straight batting title in 1963 as he rocked National League hurlers at a .326 clip. The hard-hitting outfielder-third baseman had previously batted .346 in 1962 and collected 153 RBIs, top in the major leagues. No stranger at winning batting championships, Tommy’s .357 mark at Kokomo was tops in his circuit. A right-handed hitter, he cracked 211 hits at Spokane in the P.C.L. where he was batting king with a .345 average in 1959. During the 1963 World Series, Tommy hit .400 against New York Yankee pitching. The outfielder has player in three All-Star games during his 5 big league campaigns.”
That is what Topps had to say on the back of the card. Naturally I have my own two-cents to add-in. I LOVE these cards. I love the color, the size, the composition, the story on the back… I don’t like that they went with a posed, spring training, non-action, “fielding” pose for one of the top hitters in the league. A nice action shot at the plate would have been WAY better, but they did get that on the back. Okay here are some fun facts about Tommy Davis.

Tommy Davis was born Herman Thomas Davis Jr. in March of 1939 in Brooklyn, New York. The year of his birth was the same year that Leo Durocher took over as the Brooklyn Dodgers manager. They finished third in the National League, led at the plate by Dolph Camilli and on the mound by Luke Hamlin won 20 games. Davis was a natural athlete and excelled at all sports. He was a childhood friend of NBA Hall of Famer Lenny Wilkins and they were teammates on the Boy High School basketball team in Brooklyn. Davis was courted by the New York Yankees, but it alleged that a phone call from Jackie Robinson persuaded Davis to sign with the Brooklyn Dodgers as a 17-year-old. He was assigned to Class D Hornell Dodgers in the nearby Pony League. He batted .325 in 41 games and was moved to the Kokomo Dodgers in the Midwest League the following year. It was there he met former Brooklyn Dodgers All Star centerfielder Pete Reiser who managed Kokomo for part of the season. Reiser helped Davis improve his already sweet swing and he led the Midwest League in batting with a .356 average-he also added 17 homers. The next year he jumped from Class D ball all the way up to AA and AAA later that year. 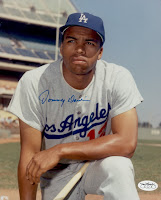 He started the 1959 season with the Spokane Indians of the Pacific Coast League and led the PCL in batting with a .345 average. He had 211 hits, 9 triples and 18 homers-for 315 total bases. After just 4 years in the Dodgers minor league system (and a .336 average overall) Davis was ready for the big leagues. He started the 1960 season in Los Angeles, but they already had an established outfield with Frank Howard, Wally Moon and Duke Snider. Davis fought his way into the line-up, played all 3 outfield positions and third base. He appeared in 110 games, hit .276 and had 11 homers and 44 RBI. He finished 5th in the Rookie of the Year vote with his teammate Frank Howard winning the honor. In 1961 Davis became a regular in the Dodgers line-up. By 1962 Davis was a 23-year old superstar. He was the Dodgers’ primary leftfielder (although he played a little 3rd and center) and he started both of the All Star Games that year in left field. He put up explosive offensive numbers and had one of the best seasons that ANY Dodger ever had. He finished with a .346 batting average, winning the NLs batting crown, he had 27 homers and drove in 153 runs to lead the league in that category, too. The 153 RBI remains a franchise record for the Los Angeles Dodgers as does his 230 hits that year. He finished third in the MVP vote, behind his teammate Maury Wills and Willie Mays. The Dodgers met the Yankees in the World Series, Davis was their cleanup hitter and he batted .400 in his first World Series. The next season he repeated as an All Star and repeated as batting champ. In their history he is the ONLY Los Angeles Dodger to win a batting title and he did it TWICE. His numbers fell off a bit in 1964 and in ’65 he broke his ankle in May while trying to break up a double play. His season was over after just one month. Lou Johnson was brought in to replace him in the line-up and the Dodgers went on to win the WS again. He was back in 1966 and played in 100 games between left field and third base. He hit .313, but his power and speed weren’t there. Losing an entire year to an injury was taxing to his timing and readiness. The Dodgers won the NL Pennant, but lost to Baltimore in the WS. After the ’66 Series Davis was traded to the New York Mets and so began his career as a journeyman with a bat. He played for 11 different teams over the next 10 years and never did return to his form in the early 60’s. He did not play in another All Star Game or another World Series. 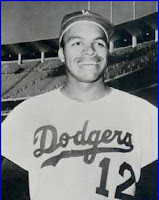 His career ended after the Royals released him during spring training in 1977. His final numbers include a .295 career batting average with 2121 hits in 1999 games. He had 153 homers and 1052 RBI. As a pinch hitter he owns the best career batting average in history with a .320 average (63 for 197). In 2005 he published a book called “Tales From the Dodgers Dugout” which I never got to finish. If anyone has a copy… Gotta go take a test. Afterwards I will try to add some more pics to this post... If anyone has these Giant cards to spare, my want list is HERE. I LOVE this set! Thanks for the fodder Tommy Davis, you are a Legend in Blue. Go Rays! Troll out.
Posted by Collective Troll at 3:56 PM