Another Chance to Win Them '56 Topps Cards - The CT Card o' The Day! 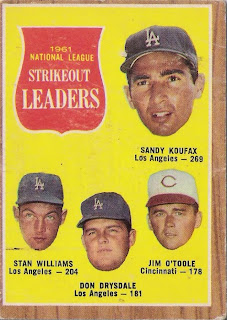 The CT Card of the Day Today is card #60 from 1962 Topps. ’62 is one of my least favorite sets of the decade. Actually from the 60’s there are 3 sets that I LOVE, they are 1960, 1963 and 1965 and the other ones I am either indifferent about or just don’t like at all. 1961 was a boring set that I felt indifferently about. 1962 I just don’t like. In fact I think that for the first time since 2006 I am going to skip out on collecting 2011 Topps Heritage. Believe it! I do intend on tracking down some singles to write about and for that same purpose I have saved up about 30 different cards from ’62 Topps. You can expect them to appear on the Nitty Gritty soon.

Today’s CT Card of the Day is one of those cards… Despite the hideous wood paneling background, this is a near perfect card – for Dodgers fans at least. It makes me think of the much cooler League Leader card from 1965 Topps which is pure blue and shows Don Drysdale and Sandy Koufax alone at the top. This card includes DD and Koufax both and but could not have been limited to the two of them.

Sandy Koufax ran away with the National League strikeout title in 1961 when he struck out 269 batters. Remember, 1961 was a year similar to the mid-1990s. Balls were flying out of ballparks like crazy (more so in the AL, but…) and 11 different batters topped the .300 mark, led by Roberto Clemente at .351. I’m saying that what Koufax did in ’61 was a testament to his dominance. He faced guys like Clemente, Mays, Pinson, Cepeda, Boyer, Aaron, Mathews, Musial and Frank Robinson on a regular basis, but still punched out 269. Koufax had 64 more strikeouts than his nearest rival. The second place pitcher in that category wasn’t really a rival at all; it was his teammate Stan Williams with 204. Another teammate, the aforementioned Don Drysdale ranked 3rd in the NL that year with 182. Pretty good, but nowhere near Koufax. The card could have been pure Dodger blue against the wood grain, but Topps went 4 deep on the League Leader cards and included Cincinnati Reds starter Jim O’Toole who finished 4th in the K race with 178, 91 strikeouts less than the League Leader. If you look at the back of the card you will see that 91 Ks was an entire season for many – it was for Dick Ellsworth of the Cubs who finished 29th in the NL with 91. It was more than Koufax’s teammates Ron Perranoski, Roger Craig, Turk Ferrell or Larry Sherry had. 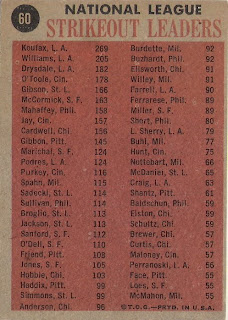 Basically with this post I am saying two things that I think everyone already knew. #1 Sandy Koufax was straight up dominant. #2, the Dodgers had a damn good pitching staff. Their starters ranked 1, 2 and 3 in Ks in 1961. If you look down the list a little further you will notice that their #4 starter Johnny Podres tied with Hall of Famer Juan Marichal for 10th with 124. Now that is a dominant pitching staff. Of course everyone already knew that. Koufax was also only 25 and just hitting his stride.

I will end this post by saying that I am in Oklahoma City, finally. We spent Wednesday night in Houston. Our flight was delayed and eventually cancelled due to the weather. We killed 16 hours at the George Bush International Airport and did so without our luggage, without internet and with a whole lot of anger towards Continental Airlines. We got through the night without murdering each other, so that is a plus. The contest remains open. One entry per day is the rule, unless I post more than once, then you can have one entry per post. It will end soon and without notice, so GUESS AWAY Trollites!!!

Good news coming, for now I just want to take a shower… PLEASE please enter the contest and have fun and guess… Internet access is limited, but I will be around… Don’t forget the reward is 3 cards from 1956 Topps of Hall of Famers… Go Rays! Screw Houston! Troll out.

Posted by Collective Troll at 4:05 PM