I got so excited posting all the cool Rays cards that the Night Owl sent me, I nearly forgot about the 5 2007 Topps Heritage short prints he had sent my way. I’ve been trying to finish this set, since, well 2007. It’s a toughy. The collation in the retail boxes was horrible. Hobby boxes weren't too much better. I can remember opening a box and getting 4 copies of several different cards. Hell, we had triplicates of short prints while still missing base cards. Anyway, its been rough getting people to send anything from this set. I think a lot of people packed these up a while back, but I am still fighting to finish this one. It felt great to brush the dust off of the binder and put these 5 cards in there, bringing me that much closer to completion.

He sent card #231 of John Nelson. John had a cup of coffee with the Cards in ’06, he is now playing Indy league ball.
Next is card #437 of Blue Jays Gold Glove, All Star, Silver Slugging centerfielder,

Vernon Wells. It’s a nice classic batting pose with the solid red background. Of all the Heritage sets, 2007 may be favorite for aesthetics.
Then we have card #365 of Tigers closer Fernando Rodney.

The fireballer is off to a great start this year, saving 14 games for the AL central leading Tigers.
He also sent card #158, team card of the Cleveland Indians.

I had every team card but this one back in ’07. Every pack I’ve ripped, every team card I’ve pulled, I had hoped would be an Indians. Glad to have this spot full.
The last SP in the bundle is card #455 of struggling Yankees pitcher Chien Ming Wang,

I think his record is somewhere around 0-5 right and I’m shedding no tears for him. I do remember back in ’07, this card was selling for around 10 bucks on ebay. Again, glad to have this hole filled.
Thanks again to Greg at the Night Owl for hooking it up big time. 70+ Rays cards and a stack of Heritage SPs will make my day anytime.
You can find my needs list for 2007 Topps Heritage cards at www.collectivetroll.webs/2007.html
By the way, look out for the Rays taking 2 outta 3 from the Mets in New York, bring on the Phillies! Also, look for Scott Kazmir 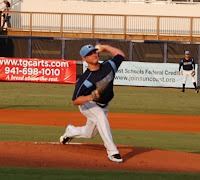 to make his final rehab start in Durham tonight taking on Clay Bucholz and the Pawtucket Red Sox. If all goes well, he will join the Rays in St. Pete on their homestand against the Phillies. Also, expect a full report on the awesome roller derby action from last night very soon...