Trading With The Saints of the Cheap Seats Baby!!!

I have been very fortunate in the trading department these past couple weeks. My latest take comes from Dan at the amazing Saints of the Cheap Seats blog. The saying goes “one hand washes the other” and Dan needed a bunch of cards to complete his 2007 Bowman Heritage set (which I gave up long ago) and the ’52 Topps Rookies series (which I lost interest in finishing a while ago). I needed more Rays cards and he had some to spare. After receiving the cards I had sent him, he sent me an e-mail saying he didn’t have near as many cards to ship to me in return. That’s okay, cuz he sent quality over quantity. I had just sorted my Rays cards into player stacks, pulled out the doubles and got a final count (yes, I am that much of a nerd) on my player collections. I had 33 different Scott Kazmir cards before I opened this trade. Dan sent me 5 Kaz cards and they are all new to me. I was putting these away as Kaz was pitching against the Marlins on Saturday night. He threw 5 solid innings, giving up 2 earned and striking out 5. I think Kaz is back.

This one stands as my favorite of the bunch. I like the green background and the white border frame.

He also sent the Rocco Baldelli card from the same series.

He included the Kaz and a card of Jonny Gomes, who has found a home with the Reds, hitting .343 with 4 homers for them this year. He did send me one 2007 Bowman Heritage card in return for the Bowmans that I had sent him. It was the one card that I wanted and never was able to pull, a prospect card of

Reid Brignac, who is back down in AAA with Durham. I don't know if he will ever be an every day player for the Rays, but with his talent and ability he will certainly find a permanent job somewhere. I normally only get excited about getting current Rays, but the ex-Rays cards he sent were so neat, I am gonna post them, too. There is a 2001 Bowman Heritage of

Greg Vaughn, card #323. It’s an up-close black and white portrait of the slugger. Vaughn, who is Mo’s cousin, played in the Majors for 15 years, hitting 355 homers and driving in 1,072 runs. He was the National League Comeback Player of the Year in ’98 for the Padres when he hit 50 homeruns. He was also a 4 time All Star. He spent 3 seasons with the Devil Rays, never really regaining his form. He hit 60 homers for the Rays.
Another slugger who did time in Tampa Bay was Jose Canseco.

He is featured on this Curtain Call insert from the 2000 Upper Deck set. It is card #CC19. I wasn’t too pleased when the Devil Rays signed Canseco (twice) but he did bring the power when he hit 34 home runs in ’99 for them.
He sent a few 1998 Upper Decks. I hadn’t seen these in a while. I was still collecting when this set came out; I think that I even ripped a box of it.

One of them is Roberto Hernandez, the man who saved the Rays first win in ’98. Hernandez was a two-time All Star who spent 17 years in the big leagues. He appeared in over 1000 games and saved 326 of them, good for 12th All Time. His best year as a Devil Ray came in 1999 when he saved 43 of their victories.
The trade ends with 4 really awesome BJ Upton cards that I did not yet own. 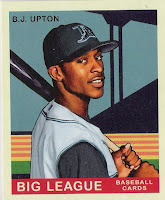 A 2007 Goudey, red back, card #12. I was collecting this set, but gave up. I didn’t like the green back, red back thing. I really didn’t like getting 2 cards of the same player in the same pack, one with a green back and one red. Anyway, when I gave up, Delmon Young was the only Rays player I had pulled. I didn’t even realize that BJ was in the set.
I am becoming more and more enamored with Topps Finest lately. I haven’t ripped a pack of it since ’95, still trying to finish that set, I think, but I have got a few cards lately from that series.

This is my first 2005; card #7 0f then teenaged infielder BJ Upton.
Another cool ’05 Upton he sent is a Leaf Century Collection card,

showing Upton post swing. I can’t make out his jersey number on this one, 15, 25, 35? I can’t tell. The picture on the card’s back has his number airbrushed out. Odd.
That’s all for another awesome trade! Thanks Dan, I really appreciate the cards. Since I have started to write this today I have gotten 4 more envelopes in my post box, so I gotta a lot of work to do. Right now, I am signing off, gonna watch the Rays try and take the second game of the series against the Jays! Did anyone watch that game last night? Niemann, Upton, Crawford, Bartlett and everyone looked awesome, great game!
Oh, the Longo card at the start of this is from Dan, too. I never get tired of getting Longo cards and that whole UD Masterpiece set is pretty awesome. Does anyone know how Greg Vaughn or Roberto Hernandez are TTM? Go Rays!! Troll out.
Posted by Collective Troll at 9:30 PM