When you mix 90’s technology with 80’s gaudy-cool, bad things happen. Generally, when you attach the name Skybox to baseball cards, bad (hideously ugly) things happen. This is one of the gaudiest, ugliest, dizzying sets ever, it may be the very reason that I disappeared from the hobby for 9 years. It is, if nothing else, attention grabbing and this post is about Quinton McCracken, an original Devil Ray. 1997 was a breakout year for the young McCracken. He hit .292 and stole 28 bases for the Rockies, but they left him unprotected and the Devil Rays stole him in the expansion draft with their 4th pick. He was the Devil Rays starting center fielder in their inaugural game; he was also their lead-off hitter. At 28, he had some big league experience, but was young enough to build around. He was off to a great start: he was named the American League Player of the Week after the first week of the season, and he batted .483 and scored 7 runs over that span. Along with Miguel Cairo (it was a double steal) he stole the first base in Rays history. He also scored the first run ever by a Devil Ray. He was the Devil Rays player of the year in 1998. Early into the 1999 season he tore his ACL and never really regained his prowess on the field or on the base paths. He spent the 2000 season in AAA, same with the 2001 season where he played for Edmonton in the Twins organization. He did establish two team records that year that held up for 11 seasons. He had 18 outfield assists in 1998; he had 2 in one game twice that year. As a team, the Devil Rays had 47 outfield assists in 1998. Both of those records still stand. McCracken also had an 18-game hitting streak in 1998. That record stood for 11 seasons, until last night when current Rays shortstop Jason Bartlett hit safely in his 19th consecutive game establishing a new team mark. Congrats to both Bartlett for setting the new standard and to McCracken for setting the bar high in his only full season with the team. 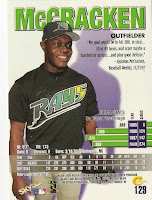 The back of the card shows a quote from Q which says “My goal would be to hit .300, to steal 30 or 40 bases, and score maybe a hundred or so runs…and play good defense.” He never reached those goals (other than the great defense), but he gave hope for a young team to succeed and his name lives on in my memory and in the record books.
Posted by Collective Troll at 1:50 PM