Tampa Bay Rays and Bradentucky Bombers Rock Out on Sunday!!!

Yesterday was a great day.

David Price earned his second win of the year, BJ Upton homered and the Rays finished their interleague home stand with a 5-1 record, suffering just one loss, the first game against Jamie Moyer and the Phillies. They successfully swept the Marlins and Scott Kazmir and Chad Bradford are back with the team and in mid-season form. The Rays have a 13-5 record in interleague play this year. They are 42-35 overall and they moved past the Blue Jays into 3rd place in the American League East, just 5 games behind the Boston Red Sox. They are riding a 5 game winning streak and are 7-3 in their last 10 games. BJ’s third inning home run was the 100th homer for Tampa Bay this season, making them the quickest team in Major League history to reach 100 homers and 100 steals. Led by Carl Crawford with 39 steals and

BJ Upton with 28, the Rays have 118 steals as a team on the year. During the sweep of the Marlins, reliever JP Howell had two wins and a save in 3 games. Overall on the season his numbers are All Star caliber, with a 4-2 record with a 1.67 era, 5 saves and 46 strikeouts in 37-2/3 innings this season.
The Rays are all over the league leader boards, even with Jason Bartlett not having enough at-bats for his .364 batting average to qualify.

Carl Crawford is 7th in the AL in batting with a .314 mark. He is 3rd in hits with 97 and leads the League in steals. Carlos Pena is leading the American League in both home runs with 23 and runs scored with 58. Current second baseman, Ben Zobrist is pacing the AL in slugging percentage (.622) and tied for 3rd in triples.

Third baseman Evan Longoria is 4th in slugging percentage (.575), tied for 2nd in doubles (24) and in second place in RBIs with 63. His .306 batting average is 15th in the league. He and Ben Zobrist are tied for 13th in the AL with 16 round trippers each.

On the other side JP Howell, whose 1.67 ERA doesn’t qualify for the league leader board is pacing the AL in games with 38. James Shields

does qualify and his 3.41 ERA is 13th and he is in a tie for most games started this year. He is also 6th in innings pitched this year, overall he has a 6-5 mark with 76 Ks. Matt Garza (5-5 3.61) has 85 Ks which is good for 8th in the league. Jeff Nieman is one of 14 pitchers this year to throw a shutout. Zack Greinke remains the only pitcher who has 2 so far this season.
The Rays are gearing up to head north and take on the Blue Jays at home. Jeff Nieman (6-4) will get the call for the Rays who will be facing (in my opinion) the best starter in the American League in Roy Halliday (10-1 2.53). It will be Halliday’s first start since June 12th. He has been sidelined with a right groin strain. Prior to that, he had been 7-0 in his last 10 starts. A few of the Rays have had serious success against Halliday. Carl Crawford is hitting .327 against him with a home run in 49 at bats. BJ Upton has a .304 average with a home run in 23 at bats. Russ Adams in the only Jay who has faced

Nieman more than 5 times and he is 0-10 career against the righty. Wells, Scutaro, Rolen, Lind and Alex Rios have never faced Nieman in the big leagues. Matt Garza and James Shields will get the call to start the 2nd and third games of the series. In game 3 the Rays will face Jays rookie Ricky Romero (5-3 3.20) for the first time. No players in the Tampa Bay line-up have a single at bat against Romero. Really the only negative thing that could be said about the Rays is they

sent one of my favorite starters to AAA Durham this weekend. It is a great problem for a team to have, having too many quality starters, but I hate seeing Sonny sent down. Last year he tied for the team lead in victories, but this year he suffered a few bad innings, even though he has pitched better than his 6-7 record shows. Hopefully he will be able to tune things up and rejoin the Rays soon.
In other GREAT news this weekend, the Bradentucky Bombers travelled south to Fort Myers to take on the Palm City Punishers for the first time this season. These two teams have serious history from prior seasons and I had been waiting for this matchup. Their home rink skated much faster than ours and the game was all action. 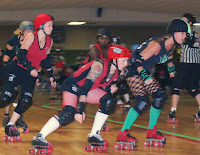 The defense had little time to get set, but big hits and great one on one matchups kept the scoring low. The Bombers were staked to a 30+ point lead at the end of half-time. It was a game of firsts and lasts for the Bombers. Rookies Blaque Jaque, 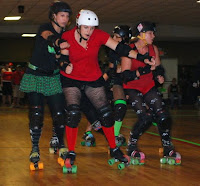 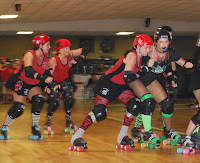 all made their first appearances with the Bombers travelling All Star A-squad. It was the final bout for last seasons Rookie of the Year and defensive mainstay Splatsy Kline.

Kline was named co-captain for her last bout and I gave her a memorial introduction thanking her for all she has done for the league, the team and for being a friend.

The Bombers made sure it was a bout to remember for her. Both teams traded the lead and kept it close. At the halfway mark in the first half, the score was 22-20 in favor of the Bombers. After that, the Bradentucky offense took over with 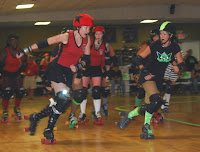 (who was my announcing partner last week) was named best jammer for the Bombers while Jamsterella took that honor for Fort Myers. Busty Bruiser

won the hardware as Bradentucky’s top blocker with Flying Da Brie taking the award for the Palm City Punishers.

There will be a rematch of these two teams on July 19th at Florida Wheels in Bradenton. It will be the final bout of the season for the Bradentucky Bombers.
Thanks to Bombshell Sinda Roller for all of the photos from this weekends bout!
Posted by Collective Troll at 3:10 PM