Tradin' With Ryan at the Great Orioles Autograph Project

Ryan at the Great Orioles Autograph project set some lofty goals for himself, but as I’ve read and followed his blog, he’s on the right track. He’s a Baltimore Orioles fan and has set out to get an autograph of every guy to wear an Orioles jersey, even for one game. He’s out there at games, tracking down former O’s, he’s going TTM and sending cards to guys in Independent baseball leagues and tracking down their addresses. He’s even hitting eBay to fill in the blanks. He’s at 49% already and he seems to have the diligence to finish this project. I used to work for the Orioles (minor league) organization. I also worked for an Orioles website for a few years. I wish I had thought of asking for autographs back then, cuz I would love to give Ryan a helping hand. Actually, I did get an auto from one guy… 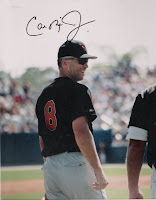 One of my favorite guys to interview was Moe Drabowsky. I learned from Ryan’s site that Moe had passed away. I wish I had kept in better touch with him and his family, its sad when you’re so busy that someone you call a friend dies and you don’t realize for 3 years. Another great player and good friend that I got to spend time with was former Rookie of the Year, Curt Blefary. He passed away 3 months after our interview. He had his ashes sprinkled over the Yards. Thats a true Oriole righ there.
Anyway, even if you aren’t an Orioles fan, his site is very interesting and filled with great pictures, so check it out…
Anyway, I wrote to Ryan to propose a trade and before I even got any Orioles cards together for him, I had a package in my mail box. He had checked out my collecting site at www.collectivetroll.webs.com and scoured my lists for 2008 Heritage cards and sent me 3 from my low numbers list, including card

#65 Jason Giambi, which I had 9 copies of with a black back, but no green backs. Card #283 of Miguel Cabrera

(which I had traded away not realizing I didn’t have doubles) and card #371 of (potential future Rays pitcher) Pedro Martinez. This is another that I have a slew of black backs of. When I first put the set into a book, I used black backs as spot holders for greens, then got all confused and figured since the space was full, I didn’t need it. I think I traded away a few Pedros before noticing. Anyway, Ryan corrected that problem for me, thanks! I thoroughly checked the book and yanked out the last black back. Anyone have a copy of card #201, JJ Putz

they can send me? Or card #211 of Mike Sweeney and card #337 of Lyle Overbay? After that, I need just 8 short prints and the low number set will finally be done!
Ryan also hooked it up with the high numbers, sending along about 50 of those off of my list. Between hobby boxes and retail blasters, I opened over 350 packs of low number Heritage in ’08. I can’t believe I am still fighting to finish this one!

I have taken a different approach for the high number set. I am going to rely on the kindness of strangers, err fellow bloggers, cuz I don’t have the $$$ to spend a thousand dollars ripping packs anymore, (yeah 350 packs, $1,000+, crazy!) so I bought 2 blasters and called it a day. Thanks to people like Ryan, Stephen from the Easy Life and Ed from Roll Out the Barrel, I only about 70 cards to finish it up.
Anyway, I put the cards directly into my book, so I don’t really have scans of them, but I can assure you they are all awesome in their Heritage-ness!
Thanks for the trade, Ryan! Good luck on tracking down all of those Orioles! I have a lot of stories to share about ex-O’s…In fact; I may even post an unpublished interview on here one day.
Posted by Collective Troll at 12:51 PM