Trading with the Waxaholic, Part 2

Okay, I am a day late, but as promised, here is part two of the trade I received from Captain Canuck from the awesome Waxaholic blog! If you haven’t read the adventure these cards faced while attempting to cross the border in the States, please go back and read it.
Here are the Rays cards he sent…
A big stack of 2007 Fleers including card #50 of right-hander James Shields

#120 of lefty Scott Kazmir who is pitching as I type against the Marlins. Kaz is 4-4 this year, but hasn’t made a start in the Major Leagues since May 20 when he went on the DL. He has looked fantastic in his two rehab starts, but he’s been pitching against minor leaguers. This is going to be a telling start for him.
I’ve been lucky with 2006 Topps Devil Rays cards lately. I now have 2 full team sets. The Captain sent a bunch of these, including card #5 of (Devil) Rays All Star leftfielder

Carl Crawford. Craw is batting .314 with 38 steals so far this year.
He sent me some 2009 Topps Finest, too. This is the first I’ve seen of this premium product. I like the design with the shiny silver background, which makes the photo pop out in a 3-D kinda way. They have multiple choice Finestrivia on the back. I got 2 cards,

who is in the middle of another great season (.312/16/62).
He rounded the Rays cards out with a bunch of cool Topps black cards and I am so glad these didn’t suffer the knife of Homeland Security. I had never actually seen any of these cards before, but I did a little research because I would love to be pulling some of these myself. The “black” cards are available at Wal Mart stores exclusively in Topps Series 1 retail blaster packs. There is a nine digit code on the top of the box which is Code: 1-825-50-13-9. I think that all the base cards in boxes with that code will be black. I know that next 20 bucks I have, I will be buying one of these boxes because these cards look really sharp.
I am now the proud owner of 5 of these cards including card #22, Classic Combos featuring Longoria and David Price. 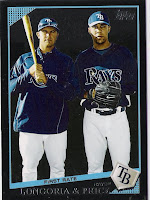 He sent cards of those two by themselves also. The other 2 black cards are #174 of

Eric Hinske. He was one of our favorites last year when he hit 20 home runs for the AL Champs.
Well, that sums up part two. Thanks again for the trade Waxaholic! And thanks for sending a package so suspicious looking that the border patrol had to tear it apart, therefore leaving me with a funny story. The Rays are down 1-0 in the 2nd inning, I gotta go! Go Rays!!! Troll out.
P.S. Only 2 people have claimed one of the free team sets I offered two posts ago. Doesn't anyone like free cards anymore?
Posted by Collective Troll at 7:34 PM