The Yankees and Rays were rained out in New York last night. With no baseball to watch, we had a fun night party hopping around the neighborhood. We started at the Rawk Shop, which had a free concert. The band was our friend Mike’s group, and it was their first show. The band is called 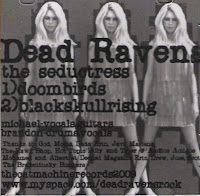 Dead Raven (www.myspace.com/deadravensrock) and they were as loud and fast as a band called Dead Raven should be. The comic relief between songs sold him as a front man. The blood-thirsty mosquitoes which plagued the outdoor venue were the only negative. It was a pretty perfect show, a good amount of roller girls from our team showed up and it was a great time. Esther Gin and I left, walked down the street to buy beer and started making our way to the next stop. We paced our house and couldn’t resist running upstairs for a shot. We did, and then started walking over to our friend Ernesto’s house. He had been laid off and he was having a last minute party to “celebrate”. Things were pretty quiet when we arrived, but within a few minutes his brother Robert arrived with a few bottles of Jagermeister and things got interesting. I don’t remember everything and I don’t want to bore my troll readers with all the gory details, so lets just say everyone had way too much to drink, had a lot of fun, no one got hurt and no one drove drunk. It was a good night. Our downstairs housemates are throwing a party today, so I had to mow the lawn this morning. I had been putting it off for a while and it was pretty long. My severely hung over body was not happy being out of bed, never mind pushing a mower through the product of 3 weeks of afternoon rain, but it had to be done. My sweat was about 40 proof. It wasn’t pretty.
It was perfect that the Rays were on TV this afternoon against the Yankees. Hangovers and afternoon baseball go perfect together. It was the much anticipated match up of CC Sabathia versus David Price. Both hurlers looked good, Price was a little wild and both suffered from poor defense behind them. The game really got cooking in the 9th, so I am gonna skip right to it.
Top of the 9th and the score is even at 5 each. Mariano Rivera is on the hill for the Yanks. I was sure he was gonna shut my team down 1-2-3 like he has so many times before. Then, I figured with the heart of the Yankees lineup in the bottom half; they would get the walk off win. It has happened before, but…

Ben Zobrist led off. He was wearing the ridiculous mirrored shades he has on his ’08 Heritage card. Apparently they are his lucky glasses because he had a big home run earlier in the game. I’ve never seen Zob face Rivera before and I was nervous, but he drilled a triple to lead it off. Joe Dillon followed with a single to score him.

Rays are up 6-5. Navarro was up next; he was trying to bunt Dillon to second, but ended up swinging away and moving him over on a fielder’s choice. Matt Joyce gets the call to pinch hit for Kapler (great call) and he hammers a long line drive to right field. Nick Swisher had been playing him deep and he timed a leap perfectly and caught it at the wall. Dillon tagged and went to third. Longoria, who had a hamstring issue and didn’t start, came on to hit for Brignac. Rivera walked him intentionally to face BJ Upton who waited on deck. Longo trotted to first, but got pulled for a pinch runner. The bench was pretty empty at this point, I think they were out of position players; they were down to a few pitchers and a catcher. So who gets the call to run, but Andy Sonnanstine?

I thought it was a great move. So BJ is up, facing Rivera with 2 outs and runners on 1st and 3rd. Upton singles up the middle and scores Dillon. Rivera is “yanked”. I have seriously never seen him look that bad.
Phil Coke is brought in to relieve him, inheriting runners on 1st and 2nd. His task is to get Carl Crawford out. Craw worked the count full and fouled off a few before lacing a single to left. Sonnanstine was running on contact and got waved in, sliding feet first into home. He was safe. Damon’s throw was offline and now the Rays are up 8-5 on Craw’s RBI single. 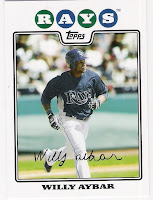 Aybar steps to the plate. He had also homered earlier off of Sabathia. He hit a hard grounder to third base; A-Rod played it to his side and booted it. Everyone is safe and Upton scores. Rays up 9-5. This brings Carlos Pena to the plate. He was having a rough day and was 0-4 at this point. With 2 strikes on Pena, Crawford took off for 3rd. He gets gunned down by a perfect throw from Posada. Inning over. Well, the ball game belongs to the Rays if Dan Wheeler can get through the heart of the Yankees line-up.
Wheeler is the 5th Rays pitcher to take the mound and the 6th to see action in the game.

Jeter led off and promptly blooped a single over Willy Aybars head (Ayber started at 3rd, but was playing 2nd now). Damon followed with a double (a good way to make up for his bad throw) and the Yanks had runners on 2nd and 3rd, no outs and

Mark Te$eira up. Tex drilled one over Upton’s head in center. It was a bases clearing double. The score is now 9-7 with no outs in the bottom of the 9th. A-Rod is up and he hits a hard grounder to third base, which is now manned by Joe Dillon. Dillon makes a nice play and throws A-Rod out at first. Posada is up next and he works the count full. Wheeler is sweating on the mound. Posada lines out to center. Two outs, score is 9-7 in favor of the Rays, the Yanks have a man on second. With Robinson Cano heading to the plate, Wheeler’s day is done. He made things dramatic, but he didn’t blow it. Former Yankee, Randy Choate comes on as the Rays 6th pitcher. His task is to get Cano out and end the game. Cano’s task is to keep the came going. A home run will tie it up; a single will bring Nick Swisher to the plate as the winning run.
Choate spent 4 years in New York, but this is his first time pitching against his former team. The count goes full against Cano. There have been a ton of full counts this inning, but no strike outs and the only walk was intentional. Choate delivers a fast ball to Cano who drills it to center. BJ was playing shallow and had to run back, but grabbed it a foot away from the warning track. Game over, Rays win!!! They are one game over .500 and just games out of first place in the AL East, a spot occupied by the Yankees. They’re playing again tomorrow afternoon and I will probably be hung over again, so expect another recap!

Don’t forget to write in Ben Zobrist on your All Star ballots, Troll out.
Posted by Collective Troll at 7:45 PM