So, last night we had a little going away party for one of our top skaters after practice. Splatsy Kline announced that her and her husband will be moving to the Washington, DC area.
This will probably be the first in a series of partys as she is not leaving until the 29th of this month, which is the day after the Bombers travel to Fort Myers to take on the Derby Girls down there.

Splatsy Kline is in her second year with the Bombers. She was voted the leagues Rookie Of The Year last year. This year, she starred on both Bradentucky teams and was one of the premiere blockers on each. 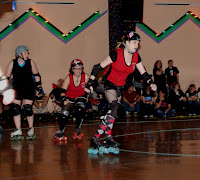 She is a pretty awesome jammer, too. There is no doubt that she had grown into a Star on the Bombers, she is also one of the coolest, friendliest, nicest and best people you could ever meet. Next month you could probably see her skating for the DC Roller Girls. With the retirement of Vixen Da Crusher

last month and Splatsy moving, this will open up 2 spots on the 14-Lady roster for the Bombers A-team. We will have an exhibition bout next Sunday and Coach Wilkes will likely be taking scouting notes. We have flyers for that bout now,

check 'em out... Observant readers may notice that the lady in red is miss Esther Gin N Juice, occasionally known as Ms. Troll, my better half. Looking good baby!
Come join us and help say goodbye to Splatsy, plus watch as she makes sure that Fort Myers never forgets her!!! Go Bradentucky Bombers!!!
Posted by Collective Troll at 2:23 PM