Crabs Game Washed Away and a Primer on Rays Prospects...

Today was supposed to be a busy day, but it ended up being a bunch of near misses…We (the wife and I) were supposed to go on a kayak trip this morning, but it was cancelled last minute. We ended up taking the new puppy to the vet to have her stitches (she ain’t having any babies!) removed and then took her to the dog park where she picked on (played with) a puppy that was half her size. 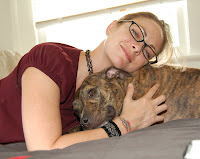 Esther Gin had plans to hang out with her friend Michelle, so I figured I would head to to watch the Stone Crabs entertain the Palm Beach Cardinals. It’s a pretty long drive, about an hour, and I nearly sweat to death it was so hot and sunny. My car is old enough to vote and drink (it doesn’t actually do either) but it does guzzle gas and shake to the point that you feel like its going to explode at speeds over 40 MPH. Anyway, it got me there, which was nice. It may have been the oldest car in the lot, but it wasn’t the only one. The place was packed! I paid 3 dollars to park in a field and walked about 2 miles to wait in line and bake in the sun at the ticket window. I got an excellent seat, 2nd row up behind home plate, but I never did get to sit in it.

It had started to drizzle a little while I was in line for the tickets, by the time I got inside the park, it was full-blown downpour and the tarp was already on the field. Like the other 3,000 or so other fans,

I found a spot under an overhang and tried to keep my camera and gear dry. I ended up hanging out in their gift shop and buying a whole bunch of useless things that I can’t afford emblazed with the awesome ‘Crabs logo. After about 5 minutes, it was clear that they weren’t playing baseball, but I ended up waiting for about an hour before I gave up. 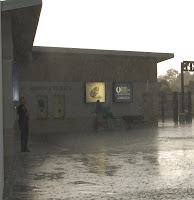 I’ve been going to games at a domed ball park for 12 years now; the rain delay thing is foreign to me. Honestly, the last game I went to that was called for rain was at Shea Stadium in 1990(remember that place?) and Doc Gooden (who went 19-7/3.85 ERA-superb run support) that year was set to face the Expos and Dennis Martinez (10-11/2.95 ERA-horrible run support).

Coincidentally, Dennis “El Presidente” is the pitching coach for the Palm Beach Cards and I was really looking forward to meeting him. He is one of those guys, like Luis Tiant (229-172), Jim Kaat (283-237 and a million Gold Gloves), Tommy John (288 wins), Billy Pierce (211-169), Bert Blyleven (287 wins and 3701 Ks-it’s a joke that he isn’t in) and Lee Smith (478 saves) that come up often in talks about belonging in the Hall of Fame. Martinez is the winningest Latin-born pitcher of All Time with 244 victories, he won a World Series with the O’s in 83, he pitched a perfect game in ’91, he pitched 30 shut outs and had 122 complete games. He was 12-5 for the Indians in ’95 at 40 years old. He had the longevity, he had the control and he pitched a lot, topping 200 innings 9 times. Anyway, that is another blog for another day… Back to my rainy day. The game was called eventually; it has been rescheduled to be a 7 inning double header tomorrow.

Unfortunately I have to work, so I will miss out. Jim Morrison (the Crabs manager) had posted his lineups as it was still bright and sunny twenty minutes before game time, so I can go over what might have been.

Fernando Perez was set to lead off and play center field. He was a late call up for the Rays last year and impressed everyone hitting 3 homers, stealing 5 bases and scoring 18 runs in the final 23 games last year. He dislocated his wrist diving after a ball in spring training this year and had been on the DL all year. He played a Gulf Coast League (Rookie Level) game earlier this week, but this was going to be his first true rehab start. I think he would have gone 5-5 with 4 steals-we’ll see tomorrow. I know the Rays are anxious to get him back on the base paths.

Batting second was Shawn O’Malley at shortstop. This guy is one of my favorite Rays prospects; he is a 21-year-old right handed hitter who the Rays drafted in the 5th round in 2006 out of in state. He’s been in the Rays system since he was 18 and had 50 steals coming into this year. So far in ’09 he is hitting .266 with 38 steals for the Crabs. He could be the next Jason Bartlett and YES I will be collecting Shawn O’Malley cards, so send them my way-I really don't want this card of him looking slightly to the left to be my only one... Batting 3rd was switch-hitting second baseman Drew Anderson. Like Fernando Perez, he is also 26 years old. He was drafted by the Reds in the 13th round of the 2004 draft out of and has made it as far as AAA playing every position other than pitcher and catcher. He started the year in AA, but dropped down to high A and has been hitting great. He has 15 hits in 45 at bats (.333) with 2 homers.

Ryan Royster was the DH and clean-up hitter. The 23 year old righty is hitting .239 with 4 homers and 35 RBIs. 22 year old lefty John Matulia was hitting 5th and playing right field for the Crabs, he is hitting .268 this year.

Mike McCormick, who the Rays picked up in the 5th round of the 2005 draft out of high school in , was batting 6th. He was drafted as a third baseman, but his strong arm tempted the Rays to convert him to a catcher. He has 8 homers for the Crabs this year. Batting 7th was switch-hitting first baseman Shawn Williams, followed by Matt Hall playing 3rd base. In the ninth slot is the Crabs regular center fielder, playing left field to make room for Perez, Emel Salem.

, a speedy left-handed outfielder, was picked by the Rays in the 6th round of the 2007 draft. He has 76 career steals in 3 seasons in the Rays organization. He is a very similar player to Fernando Perez, minus the switch-hitting, but has the great defense and base running skills and savvy to get on base. Pitching for the Stone Crabs would have been 23 year old lefty (his birthday was this Thursday) Jake McGee.

Last year Baseball ranked McGee, who the Rays picked in the 5th round of the 2004 draft, their #3 organizational prospect. This year, he was ranked 9th. He pitched for the Montgomery Biscuits (AA) last year and went 6-4 with a 3.94 ERA in 15 starts; he had 65 strike outs in 77 innings. His season ended in June when he had Tommy John surgery to repair his injured elbow. He has been rehabbing with the Stone Crabs for the past month with little success. This would have been his 6th start for the Crabs. His last start was horrific. Facing the first place Fort Myers Miracle, he allowed a home run and five runs total in the first inning without recording an out. He has a 12.38 ERA, allowing 11 hits, 11 runs, 3 walks and 8 strikeouts in eight innings of work. ended up winning his last start 7-6 in 12 innings. Darin (another of my favorite Rays prospects) relieved McGee and pitched 7 innings allowing only 1 run to set up the Crabs comeback. who was 12-4 with a 2.00 ERA for the Crabs in 20 games was promoted to AA Montgomery after that amazing relief performance. McGee will try again tomorrow weather permitting. I will not be there. Like I said, I have work, but I am still pretty bitter about spending 3 hours on the road in the pouring rain to do nothing. Not to mention 20 bucks in gas, 3 dollars for parking, 11 bucks for a ticket, way too much in the gift shop... Yeah, I was feeling pretty sorry for myself on the way home-until I passed a guy on a Harley, at least I had a roof. Anyway, I am gonna stick to dome games in August (it rains 3 times a day this time of year) for now. I am finally beginning to dry off and am ready to head to the couch to watch James Shields and The Rays beat up on Ian Snell and the Mariners. Go Crabs! Go Rays! Troll out.

Posted by Collective Troll at 12:16 AM