These odors carry a whole bunch of information about another dog. With a quick sniff, the dog will learn the other’s sex, health and temperament.When a pitching coach (it has to be a GOOD pitching coach) sniffs a pitchers butt while they are warming up, they can tell many things, too. What kind of break their curve will have, how much velocity their fastball is carrying, how well they will change speeds and locate pitchs, even how many innings they might last. Jim Hickey is one of the best pitching coaches in baseball. 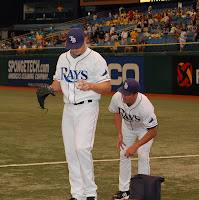 Through this one sniff, he immediately knew that Scott Kazmir was going to pitch well enough to win (he did), he will likely top at 92 MPH and his curve will be a little weak, but still enough to get through a team like the Royals. Hopefully, he will sniff Jeff Niemann’s butt prior to tonight’s game against the Mariners and rise up and give two thumbs up (in the air, not…) therefore indicating victory for the Rays tonight against King Felix and the Mariners. Go Rays! Troll out.
Posted by Collective Troll at 1:19 AM